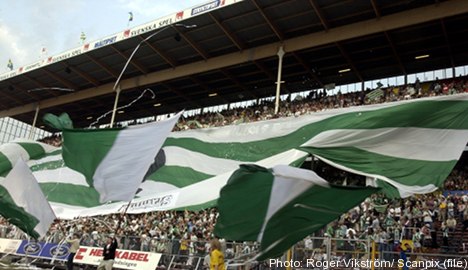 As tensions heat up before Sunday afternoon’s match, a gang of nearly 30 Hammarby fans descended upon a local pub in central Falkenberg late Saturday night, according to news agency TT.

The group clashed with guests at the restaurant and later took their fight into the street.

They continued to brawl with police officers, who responded to the 1am alarm.

At least five people were injured and a nearby pizzeria was extensively vandalized.

Two people have been arrested thus far on suspicion of rioting, reported local news Hallands Nyheter on their website.

In a recent move to curb rising hooligan behaviour, rival football club Djurgården received approval in May from the Data Inspection Board (Datainspektionen) to initiate a register of blacklisted supporters that will prevent known rioters out from attending sporting events.

“Hooliganism and criminal behaviour around and at the stadiums is a huge problem, which recent events have shown,” said director general Göran Gräsund in a previous statement.

Should this move spike a trend with other football clubs wanting to register data and exchange information about blacklisted supporters, the board may seek sterner measures.

Falkenberg and Hammarby will meet in the Premier League on Sunday afternoon.