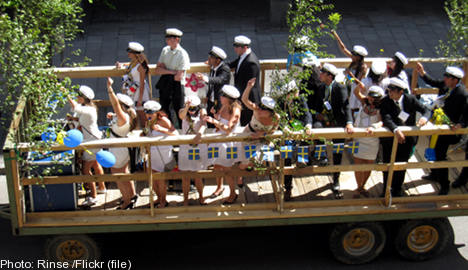 Newly graduated students revelling on their truck after school ceremony

“He felt it was provocative and that there were many little children out on the street that could take offence,” Lars-Olof Cederlund of the local police information department told daily Expressen.

On Friday, a 48-year-old man in Landskrona, in southern Sweden, reacted against a homemade graduation sign featuring the naked 3-year-old in a baby pool with his legs akimbo.

He was so offended he decided to report the incident as a child pornography crime to the local police.

“He (who held the sign) had in his possession a sign that showed a child in a pornographic position”, the report said, according to local paper Helsingborgs Dagblad.

The police have no idea as to the identity of the youth, only which class he went to. According to Cederlund there will be no investigation as there is nothing more than hearsay to go by.

“If a prosecutor feels the need to for us to look into this they only have to report it again,” he said to Expressen.

“Nowadays the law says that someone who owns or is looking at an image of child pornography that he or she has gained possession of can be sentenced for up to two years in prison. I can’t say if the person who showed that specific picture falls under the definition ‘gained possession of’’ I suppose an assessment would have to be made,” he said to Helsingborgs Dagblad.

But as far as Åkesson knows there is no established practice and he has never heard of a similar case.

To hold up a picture with an embarrassing photo of the graduating student is by no means uncommon in Sweden.

Friends and family usually get together well in advance of the graduation day to select the right one, varying everywhere on the scale from cute to embarrassing.

After the students have received their report cards and run out of the school, the so-called “utspring”, into the arms of their waiting families, they tend to go driving around town on the back of specially hired trucks bedecked with birch-leaves, singing and revelling while brandishing their own signs.

According to Cederholm of the local police, if making a sign with an embarrassing nude baby picture is a crime, he might be guilty of it himself, along with a large number of Swedish parents and siblings.

“There are many differing opinions on what could cause offence. I have four kids myself who have graduated from high school and on one of the signs we had a naked picture of my daughter when she was two or three years old,” he said to Expressen.