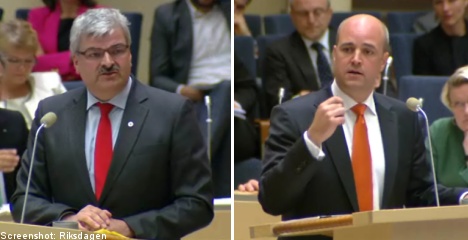 Reinfeldt head of the Moderate Party, started off the discussions by referring to recent surveys showing that Sweden is one of the healthiest economies in Europe today.

According to Reinfeldt the opportunities to keep Sweden together and force back societal problems are increasing.

“If we just develop and nurture our way of working, there are great opportunities around the corner,” he said.

And important tasks are lying in wait for the government within education and labour market policies, he maintained.

Reinfeldt also took aim at the tactics of the far-right Sweden Democrats.

“If you are not prepared to take responsibility for Sweden together and in the long-term, you should not ruin it in the short-term through recklessness,” he Sweden Democrat head Jimmie Åkesson.

Reinfeldt’s centre-right coalition won a second mandate last September but fell two seats short of a majority in an election marked by the spectacular performance of the Sweden Democrats, which entered parliament for the first time, snagging 20 seats and the role of kingmaker.

The Sweden Democrats have since sided with the leftwing opposition Social Democrat, Green, and Left parties to defeat the government on a series of key votes, including on the sale of state-owned companies and a controversial back-to-work scheme for the unemployed.

“Our protection against having a parliamentary majority take over Sweden is the finance policy framework. It is the core of the government’s power, to eliminate the possibilities of short-sighted, irresponsible majorities such as those Åkesson is pushing for,” Reinfeldt said.

Reinfeldt also stressed the importance of having a policy framework to ensure that finances were in order and wanted to know if Håkan Juholt and the Social Democrats would respect these.

Juholt, who took over as the Social Democrats’ leader in March and was participating in his first debate as party leader, became irritated that Reinfeldt was trying to “teach” him the importance of a having a fiscal policy framework .

“Fredrik Reinfeldt has no business lecturing us Social Democrats on the economy. We invented the framework for fiscal policy, against your wishes. Of course we will stick to it,” he said in reposnse.

Reinfelst criticised Juholt for promising financial reforms in articles and interviews but Juholt answered that his party hadn’t proposed one suggestion that they couldn’t finance.

“But I have higher ambitions for Sweden than just passively lowering taxes,” he said.

The new spokesperson for the Green Party, Gustaf Fridolin, also addressed the other party leaders for the first time.

Backed by Lars Ohly of the Left Party, he chose to concentrate on the growing child poverty in Sweden.

Reinfeldt retorted that he in fact thought numbers showed a decline in children living in poor circumstances in Sweden since the 1990s.

He also said that the government already has increased benefits for families with more than one child and that a more generous housing benefit will be introduced this autumn.