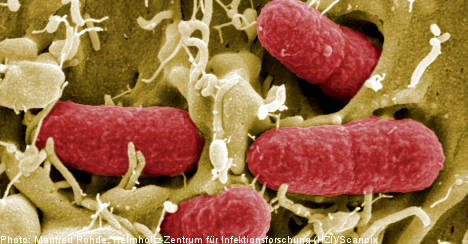 “We’re right in the middle of investigating where the bacteria came from,” Britt Åkerlind of the infectious disease unit of Östergötland County told The Local.

So far, two Swedes have been confirmed as infected by EHEC, one from Skåne in the south, and another from Gothenburg in the west.

Those infected with the bacteria all attended a dog show near Norrköping in eastern Sweden held the first weekend in June.

Of the roughly 120 participants, who traveled from all over Sweden as well as from Denmark, Norway, and Finland, about half have come down with symptoms stemming from EHEC infection.

“We’ve also received reports that some of the dogs have had upset stomachs,” said Åkerlind, who labeled the outbreak as “quite large”.

Both the Swedish Institute for Communicable Disease Control (Smittskyddsinstitutet) and the National Food Administration (Livsmedelsverket) have been notified, she added.

She explained that determining the source of the outbreak is complicated by the fact that participants ate both their own food, as well as common meals prepared on site.

Meanwhile, Sweden’s TV4 reports that around 10 people have been infected with the EHEC bacteria near the town of Skellefteå in northern Sweden.

Åkerlind confirmed, however, that Sweden’s current dog show EHEC outbreak involves a different strain of the bacteria than the strain behind the more aggressive outbreak which originated in northern Germany several weeks ago and has so far claimed 36 lives, including one Swede.

“Luckily, this is a milder variant of EHEC,” she said.

“But so far, no one has been hospitalised nor have their been any reports of secondary infections,” said Åkerlind.