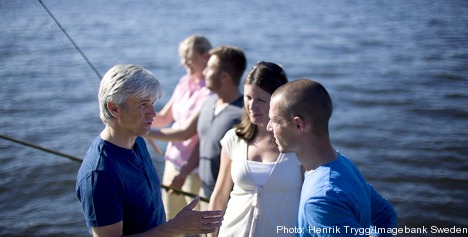 The fishing season varies because Sweden is some 2,000 kilometres long from tip to toe and has several climate zones. In the lowland, lush south the season is usually year-round off the coast and in its coastal rivers, inland rivers and lakes. As you head into central Sweden, with its massive forests, April to November generally applies and as you forge northwards to Lapland, it’s May to October.

How many lakes? About 100,000. And if you are near one (you always are in Sweden) bring your tackle on holiday, or buy it locally.

Sweden’s biggest lake is Lake Vänern (south west) at around 5,600 square kilometres surface area. It’s so big it has its own weather system, and an archipelago of some 20,000 islands. If you’re thinking that this creates fantastic angling possibilities you’d be right; you can go trolling for landlocked salmon and trout, pike and zander.

As you approach the tree line in northern Sweden, where the giant spruce forests end, Arctic tundra, meadows, glaciers and towering mountain peaks take over. Up here the lakes are full of brown trout, grayling and Artic char.

There is also a good spread of well-stocked put and take lakes in Sweden, mainly in the central and south of the country.

The big river systems are mainly in the wild north of the country. These are extremely powerful, cutting through the wilderness, creating as they go; slow pools, waterfalls and rapids. And fantastic fishing.

Hiring a guide is a very good idea if you’re fishing in the Arctic Circle because it is sparsely populated, the terrain can be difficult and weather conditions can be extreme. All adding to its exoticism and charm. Species to look out for include brown trout, char and grayling. The other sights to look out for here include the majestic northern lights and midnight sun, as well as the pristine nature.

There are also several other major river systems running through central Sweden, including the river Klarälven.

Going into central Sweden, you’ll find the 200 kilometre-long southern stretch of the river Dalälven. This area around it is a patchwork of meadows, wetlands and marches. And great fishing waters. Cast for big pike and perch and zander. Out of interest, the biggest sweet water zander caught in Sweden in 2010 was caught in this river.

Salmon? Go to the legendary River Mörrumsån in the Blekinge province in southern Sweden. There are around a dozen rivers on this east coast that stretches up to central Sweden with salmon and sea trout in them.

The long U-shaped coastline of Sweden consists of east, south and west. The east borders Finland and the Gulf of Bothnia and the west coast borders Norway and the North Sea.

Sweden’s east coast is scattered with archipelago islands and skerries. Hire a boat or fish from the shore of an island deep in the archipelago and odds are you will catch a large sea trout or pike.

Off the south coast of Sweden there are fantastic salmon catching opportunities at Hanöbukten and the waters outside Simrishamn. Trolling for salmon here might land you a 25+ kilo fish. Really.

Stay west coast-side for good deep-sea fishing as well as deep water angling straight from the rocky shorelines. Fish for cod, mackerel, garfish and sea trout. The west coast is particularly famous for its seafood and here you can even go on a guided lobster or oyster fishing trip.

So, Sweden has the lakes, the rivers, the coasts and the fish. What are you waiting for?