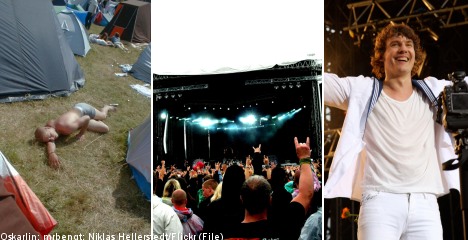 Spending up to five days in a rain-drenched tent, knee deep in mud and facing some of the worst toilet conditions known to man, may not be everyone’s idea of a holiday, but to more and more Swedes, a music festival experience is as much part of a traditional summer as herring and singing Helan går.

Of course, the Swedish summer is often so wonderful and the entertainment so good, that some of the less positive aspects of a festival are easy to forget.

That was certainly the case at perennial favourite Sweden Rock this year, which is considered by many music fans to be the season’s annual curtain raiser.

This summer as always, there is plenty to offer up and down the country, from the bijou to the giant monsters of filth.

And whether it’s a full-on camping experience or a couple of days of cultural pampering you are after, there’s certainly at least one festival out there for you.

Starting off in the capital, this weekend sees the start of the Stockholm Jazz Festival.

Over the years it has attracted some of the world’s top performers with an eclectic mix often bordering on soul and R&B territory.

One of the country’s oldest and most well established festivals, now in its 28th year, the Stockholm Jazz Festival runs from June 16-19 with notable performances from the likes of Angie Stone, Bobby Womack, Cassandra Wilson and Chic.

Jazz fans can also enjoy more traditional flavours at the Tradjazz event from June 17-19 in Askersund in central Sweden.

If it’s the more traditional mudfest that floats your boat, Peace and Love has taken over Hultsfred’s mantle as the fastest growing biggest rock/indie festival on the calendar.

Held in Borlänge in central Sweden from June 28-July 2, it has once again attracted several big names from home and abroad, including The Strokes, Kings of Leon, Håkan Hellström and topping the bill, Bob Dylan.

Known for sometimes unconventional bookings, this year is no exception, with the reverend Jesse Jackson also stopping by for a performance.

Meanwhile, Hultsfred makes a welcome return after financial difficulties last year pulled the plug on what was Sweden’s best-known festival.

For 2011, promoters have pulled out all the stops to put together a bill which will appeal hugely to fans of British guitar and dance acts.

A more intimate affair, Putte i Parken, goes on in Karlskroga from July 6-9. This much more bijou kind of festival nevertheless promises something for everyone, including The Ark, Håkan Hellström, Manic Street Preachers and a real “pop A-lister”, in Ke$ha.

Consequently, Front 242 is sure to be a big crowd puller at this year’s festival, scheduled for July 14-16, but the likes of Adam Tensta and Royksopp will surely help lighten the mood.

Amusingly, promoters promise there will be “no quiet camping areas”!

Sweden’s oldest festival, and still going strong is Storsjöyran, which takes place from July 28-30. While not such a high-profile event, the festival has a solid history and this year will host several top Swedish acts like The Sounds, the Ark, Timbuktu, Lisa Miskovsky and Håkan Hellström along with international artists, including Peter Doherty and Marina and the Diamonds.

If camping is not your thing, then perhaps Way Out West (July 11-13) could be worth considering. The three-day-long event has become an established part of the summer circuit and as it all happens near Gothenburg, those not into slumming it can stay in a swanky hotel and just rough it with everyone else at the gigs, which include headline sets from Robyn, newly reformed Britpop faves Pulp, Kanye West and best of all, a rejuvenated Prince.

You can even avoid staying out all night at all, with several one-day festivals of note taking place around the country. Where The Action Is on June 28 in Gothenburg features Coldplay’s only Sweden show this year, ably supported by Glasvegas and Brandon Flowers from The Killers, Daniel Adams-Ray and Bright eyes, among others.

Or, on a heavier note, you can catch Slipknot’s unique take on pantomime metal at Sonisphere, outside Stockholm’s Ericsson Globe Arean on July 9, along with In Flames, Mastodon and more.

In short, if festivals are your thing, and it seems that for a large proportion of people living in Sweden, they are, then this summer you are spoilt for choice.