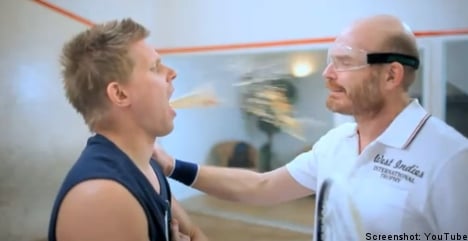 Price comparison website Flygresor.se chose to market themselves through a television commercial in which a man vomits on his friend after the two discuss how much they paid for their plane tickets.

Nearly two dozen offended viewers reported the ad to the Swedish Advertising Ombudsman (Reklamombudsmannen, RO), which ruled that the ad was indeed offensive.

In its ruling, the agency cites complaints that having to watch a person vomiting without being forewarned made viewers nauseous and made them lose their appetite.

Ultimately, the agency agreed with the complainants, ruling the commercial to be offensive and describing it as “distasteful and clearly inappropriate”.

“It’s clear that the purpose of this film was to make a connection between being sick and vomiting, and sickeningly cheap flights. It’s also clear to us that this connection is meant to be humorous,” wrote RO’s opinion board in their decision.

“The opinion board finds, however, that the humorous approach in the film is negated by the content of the film.”

Tempel, the advertising agency responsible for the film, did not understand RO’s decision to deem the commercial offensive.

“No, why would it be? This is something you see all the time,” said Anders Tempelman from Tempel to newspaper Dagens Media.