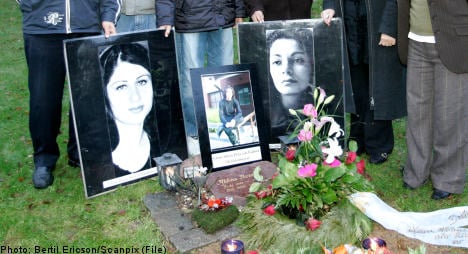 A memorial for Abbas Rezai a year after his death

The retrial to determine who really was behind the murder of 20-year-old Abbas Rezai has brought the issue of honour killings in Sweden back into focus.

“This re-trial sends out a message that Sweden won’t accept honour-related crimes,” Martin Permen, a police officer specialising in dealing with ‘honour’ killings, tells The Local.

In 2005 Rezai was found scalded, beaten, and repeatedly stabbed in the back and chest in his apartment.

Prior to the killing, his girlfriend’s family, which hailed from Afghanistan, had expressed their displeasure with the relationship.

The under-aged brother of Rezai’s girlfriend was convicted for the murder in 2006, but has recently changed his story and is now claiming that his parents, who were also suspects at the time, were responsible for Rezai’s death.

The ensuing retrial has pitted family members against one another and once again put the issue of ‘honour’ killings back into the headlines.

Rezai’s case is unique, not only because of the circumstances of his retrial, but also because he is the first known man to be killed in the name of honour in Sweden.

“It’s very unusual that the victim is a man but it only confirms that it’s not only women who are subjected to these crimes,” says Permen.

The issue of ‘honour’ killings was fairly unknown to Swedes until the late 1990s, when the term started to enter the public lexicon, especially following the 1999 murder of Pela Atroshi.

Pela, an Iraqi Kurd, was murdered by her uncles while visiting her hometown in Iraq because she wanted to go back to Sweden instead of being married off to a man she didn’t know.

Her uncles were subsequently sentenced to life in prison in Sweden.

While Pela’s murder may have awakened Swedes to the phenomenon of ‘honour’ killings, it was the 2002 murder of Fadime Sahindal that really kicked off a national conversation about the issue.

Fadime, a Kurdish immigrant from Turkey, was killed by two shots to the head from her father after living under threat with her Swedish boyfriend of four years.

Before her murder, Fadime had spoken at schools around the country and also to the Riksdag about the problems that young foreign girls face in Sweden.

“The men in the family began to call and threaten me by phone. They told me that I would never get away with this,” she said in a speech to the Riksdag in November 2001.

“My little brother was assigned to kill me. Why he was chosen was natural, he was under-aged and didn’t risk incurring any greater punishment. In addition, it was his task, as the only son of the family, to ensure that his sisters were within the cultural frameworks.”

According to Sara Mohammad, who works to educate at-risk and immigrant women about honour-related violence, ‘honour’ killings are comparable to a pure execution in their preparation and planning and are meant to help restore the reputation of a family that considers itself shamed by an unwelcome relationship or act.

“The shame you’ve carried around is washed away and your honour is restored. The person committing the crime becomes a hero,” she tells The Local.

Mohammad is founder and chairwoman of Never Forget Pela and Fadime (Glöm aldrig Pela och Fadime — GAPF), a non-profit organisation dedicated to informing immigrant women about their rights in Sweden.

She explains that honour-related violence often occurs in families where it is the mother’s responsibility to raise a girl and teach her how to behave, while the men in the family consider it their job to control the other family members.

“If you don’t control your immediate family you’ll be alienated from the extended family. It’s when a man loses control of the woman that an honour killing could be justified,” she says.

By dressing unacceptably, refusing an arranged marriage, or having sex out of wedlock, women and young girls can dishonour their families and thus give their families a reason to carry out honour-related violence, according to Mohammad.

‘Honour’ killings are also strongly connected to a woman’s virginity, as the father is supposed to guard it till the daughter’s wedding day.

“The honour lies between a woman’s legs,” she explains.

“Sexuality is what controls everything. A woman’s genitals are the most important, most dangerous and also the dirtiest part of a woman. A woman can lose her life if she loses her virginity before her wedding day.”

Permen says that the police haven’t seen either a rise or a decline in honour-related crimes in recent years.

Nevertheless, they remain far from common, despite concerns about there being many unreported cases.

“I would like to say that the police have become better at detecting the honour-related crimes. It’s not always murder either. We see girls who commit suicide on the influence of their family,” he says.

Mohammad says that an increasing number of girls and women are contacting her organisation today compared to when it was founded in 2001, but says that this is likely to do with increased media attention and a rise in honour-related violence.

Permen says that the Swedish police work extensively with honour related crimes and especially in trying to educate their staff on the differences between a “normal” murder and an honour-related one.

“They are normally very organized and well planned. There are also often a lot of people involved and it’s very difficult to get witnesses to step forward,” he says.

As prosecutors, Rezai’s relatives, and the family accused of killing him await the verdict following the conclusion of the retrial on Tuesday, Permen believes the case serves as a warning.

“I don’t think the whole truth was revealed at the last trial,” he explains.

Mohammad also believes that educating the public and the government about these questions could stop such crimes from occurring.

”We’re working on a daily basis to make the people of Sweden and also other countries in the world, aware of honour killings,” she says.

Mohammad’s message echoes that which was put forward by Fadime in her Riksdag speech from 2001.

“If society had taken responsibility and helped my parents to become more involved in the Swedish community this could perhaps have been avoided,” she said at the time.

“What has happened to me is not something one can do anything about but I think it is important that you learn something from it and do something in the future, so that these kinds of cases are not repeated.”