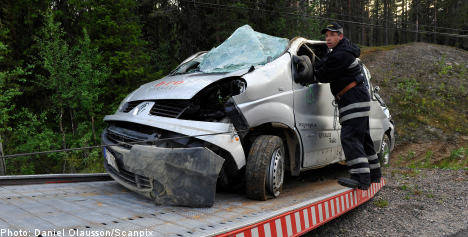 The vehicle is owned by a company that clears and plants forests.

The minibus, with 10 passengers, drove off the road and sommersaulted near Markit, a small town about 30 km east of Gällivare in the Norrbottens region.

Five ambulances, a rescue helicopter, a taxi for emergency transport, police and rescue services were sent to the scene at about 7.30pm, according to emergency services operator SOS Alarm.

Two people died in the accident.

“There are eight injured in total,” confirmed Schaufel.

The injured were taken to first response facilities in nearby Gällivare.

“There it will be determined if any of the injured need to be transferred for care to another hospital,” said Schaufel.

The officer had no information regarding the identity, age and residence of those involved in the accident.

The minibus is registered to a company involved in clearing and planting of forests for different forest companies.

It is also unclear what caused the accident.