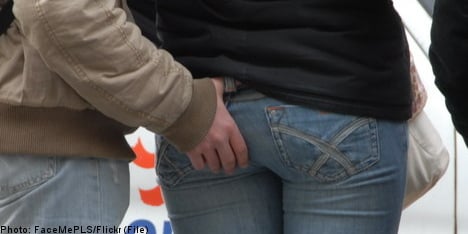 The unwelcome squeeze took place in front of classmates, parents, and others who attended the ceremony, which took place in a Stockholm-area church.

Despite verbal and written apologies from the boy, the principal decided to report the matter to police in hopes of pursuing her case in court.

“My son regrets what he did. But we don’t understand why she’s not satisfied with his apology,” the boy’s mother told the newspaper, who classified her son’s actions as “a prank” rather than a crime.

Nevertheless, the teen is now under suspicion of sexual molestation as police and prosecutors investigate the matter ahead of pressing formal charges.

According to the principal’s complaint, she felt “humiliated” in front of many witnesses because of the 15-year-old’s very public stunt, Metro reported.

In addition, the principal has filed a request to receive taxpayer-financed assistance to pay to have a high-profile attorney to represent her in the case.

According to Swedish law, a complainant in a sex crimes case has the right to receive state financed legal representation.

The principal’s request is currently be considered by the Stockholm District Court.