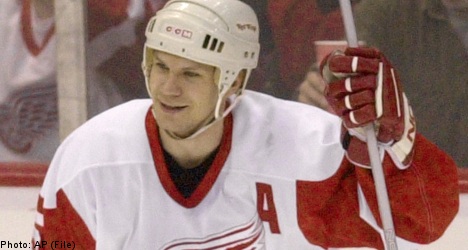 Lidström, a member of four Stanley Cup championship teams with Detroit, decided a year ago to delay his retirement, taking a break only for his eldest son to begin school in Sweden.

The 41-year-old Red Wings captain scored 16 goals and assisted on 46 others to rank second among NHL defenseman in offensive contributions, improving his numbers from his prior two seasons.

“Nick had a tremendous year and continues to be one of the elite defenseman in the game,” Red Wings general manager Ken Holland said.

But Lidström waited two months after the Red Wings were eliminated by San Jose in the Stanley Cup playoffs before deciding to return.

“The reason it took so long was I wanted to make sure I found the motivation,” Lidström said.

Lidström is a finalist for the 11th time in 13 seasons for the Norris Trophy as top NHL defenseman and should he win it for the seventh time on Wednesday he would be only one shy of the all-time record Norris awards won by Bobby Orr, a 1960s legend for the Boston Bruins, the reigning NHL champions.

The Red Wings has made the playoffs for 19 seasons in a row, a streak that began in Lidström’s NHL debut campaign.