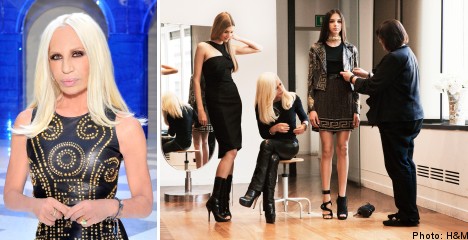 “I am thrilled to be collaborating with H&M and to have the opportunity of reaching their wide audience. The collection will be quintessential Versace, perfect for H&M and Versace fans everywhere,” Versace said in a statement.

The collection, featuring “leather, print, colour and exuberance in exclusive materials” is meant to be something of a retrospective on Versace’s heritage and will go on sale on November 19th in around 300 H&M outlets worldwide.

“Versace is one of the most important brands of recent times, and their collection for H&M will be glamorous and flamboyant – everything Versace stands for,” H&M creative advisor Margareta van den Bosch said in a statement.

“Donatella Versace is sharing with us iconic designs from the archives. This is such a celebratory collaboration and it is perfect for the party season.”

H&M’s collaboration with Versace also marks the first time an exclusive collection will feature homeware items such as cushions and bedspreads, in addition to men’s and women’s clothing collections.

Known for its trendy yet affordable fashions, H&M is the world’s third largest clothing group behind Spain’s Inditex, which owns Zara, and Gap of the United States.

It first teamed up with a top fashion designer in 2004, in a tie-up with Karl Lagerfeld and sent its monthly sales soaring.

Since then it has hooked up with the likes of Stella McCartney, Viktor and Rolf, Comme des Garcons, Jimmy Choo and Sonia Rykiel — as well as one-off lines with style icons Kylie Minogue or Madonna.

Founded in 1978 by Gianni Versace, the eponymous brand has evolved into one of the most prominent names in fashion. Daughter Donatella Versace has served as the brand’s creative director since 1997.