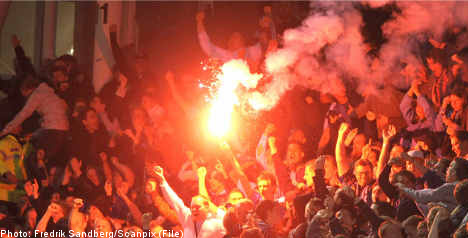 But the minister for justice, Beatrice Ask, said that the decision was “very strange” as the bill pre-empts the completion of an ongoing investigation by newly appointed national coordinator for anti-hooliganism, Per Unckel.

“It is part of the national coordinator for anti-hooliganism’s job to propose further legislation, for example about report duty, if he feels that is the best and most efficient way forward,” Ask said to daily Dagens Nyheter (DN) through her press secretary after the vote.

Unckel, who is also the county governor of Stockholm, has been given two years to prepare a proposal on how to deal with the situation.

But according to the Social Democrats two years is too long. They wanted the Riksdag to instruct the government to present a proposal for this autumn, so it will be in effect in time for next football season.

However, Lena Adelsohn Roth, minister for culture and sport, said new legislation isn’t a good solution to hooligan violence when the issue was brought to the Riksdag by the Social Democrats.

“We have laws against what has happened in Sweden recently. The problem is that these are not enforced. Blacklisted fans still get into the stadiums,” she said to news agency TT at the time.

Adelsohn Roth said she shared the view of the clubs that the major problem today is the difficulty in identifying blacklisted fans and denying them entry to the events.

The Swedish Data Inspection Board (Datainspektionen) recently granted Stockholm club Djurgården’s request to allow them create an image bank of blacklisted fans to combat the problems.

In Wednesday’s vote, the Sweden Democrats made a u-turn and voted in favour of the proposal together with the Social Democrats, the Greens and the Left Party, while the government alliance parties voted against.

The decision means that the Riksdag will now instruct the government to prepare a proposal on the issue. However, although the government isn’t ruling out the idea, they want to wait until Unckel’s investigation has been finished before taking any further steps.

Per Unckel is reportedly set to travel to Britain this autumn to study how the problems with hooliganism have been handled there.