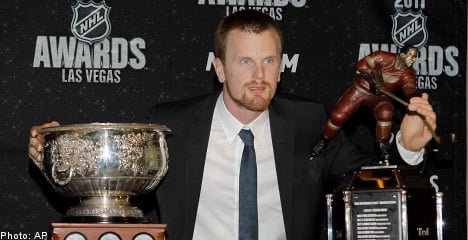 Sedin, whose Vancouver Canucks recently lost to the Boston Bruins in the 2011 Stanley Cup finals, took home the Art Ross Trophy for finishing the season as the league’s highest scorer, notching 104 points – including 41 goals.

And while Daniel failed to succeed his brother as the NHL’s most valuable player this year, he did nevertheless receive recognition for his exceptional season by being awarded the Ted Lindsay Award, given to the league’s most outstanding player as judged by fellow NHL players.

Lidström, who needs one more Norris to tie Bobby Orr with eight, won the award for the first time since 2008.

“The older you get, the more you appreciate the value of prizes like this. You’re more aware of how much work it requires,” he told the Expressen newspaper after receiving the award.

Canadian forward Corey Perry of the Anaheim Ducks beat out Daniel Sedin for the Hart Trophy for being MVP after scoring a league-high 50 goals this season, including 19 goals in his final 16 games.

Canada’s Martin St. Louis, who finished with 68 assists this season and was also an MVP candidate, earned a consolation prize as he was awarded the Lady Byng Trophy for gentlemanly play.

American Tim Thomas added his second Vezina Trophy to go with the Stanley Cup ring he earned earlier this month with the Boston Bruins.

Thomas set an NHL record for save percentage when he finished at .938, surpassing Dominik Hasek’s .937. Thomas also had a league-leading 2.00 goals-against average.

Thomas beat out Vancouver Canucks goalie Robert Luongo, who was the losing goalie in the Stanley Cup final. It was a double blow for Luongo, who found himself being outplayed by Thomas on a nightly basis during the NHL championship which Boston won in seven games.

Dan Bylsma of the Pittsburgh Penguins earned the Jack Adams Award as coach of the year, and Ryan Kesler of the Vancouver Canucks won the Selke Trophy as the league’s best defensive forward.

Jeff Skinner, the 19-year-old rising star of the Carolina Hurricanes, won the Calder Trophy as rookie of the year.

Hardnosed veteran forward Ian Laperriere won the Masterton Memorial Trophy for dedication and perseverance after coming back from a horrible injury in last year’s playoffs where he was hit in the face with a slapshot.

“It has been a really, really tough year,” Lapperriere said.