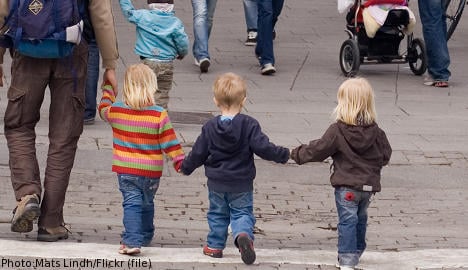 The trend, which has been pointing upward since the 1990’s, came as a surprise to the demographers behind the study.

“We were expecting a dip in third-child births considering Swedish women are choosing to wait longer before they have their first baby,” Lotta Persson of SCB told news agency TT.

Today, the average age for a Swedish women to have her first baby is 29 and demographers therefore believed that this would mean an insufficient amount of fertile years to have a third child.

According to the study, many families had a third child in the beginning of the 1990’s, but the subsequent financial crisis led to a break in the trend toward the end of the decade.

The SCB demographers believe that the latest credit crunch may have a similar effect on the current trend.

“There was no increase between 2008 and 2009 and that could have been an effect of the financial crisis,” Persson told TT.

Factors that influence the choice seem to be education level, income, country of origin and neighbourhood demographics. But if one has a greater influence than the others is difficult to say, according to Persson.

“It is difficult to grade them as they can influence each other as well. Income certainly matters. It is those that have the highest income that are more likely to have kids, but also those with the lowest income, “ Persson told TT.

New Swedes tend to have a third child, and people living in larger cities or in areas where many families with children reside, are more likely want more than two children.

However, sometimes even those who live in areas with few children have an increased tendency to have a third child. This particularly applies to mothers of two children who live in owner-occupied apartments (bostadsrätter) in metropolitan areas.

The trend could mean that SCB will have to revise their predictions on the fertility figure of Swedish women.

The fertility figure, which is a measure of how many children women have on average, is set at 2 per woman. Demographers had predicted that this figure would drop to 1.8 over a number of years.

But according to Persson, this figure might now have to be revised.