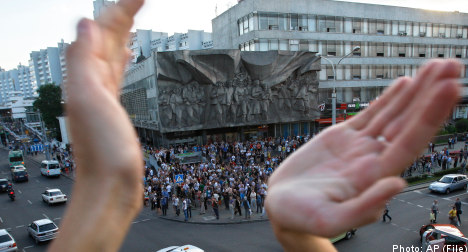 David Emtestam, 31, was on hand to observe a demonstration in the Belarussian capital Minsk when he was attacked by several law enforcement officers.

“He was attacked by some sort of special police force and was kicked a number of times,” foreign ministry spokesperson Tobias Nilsson told the Dagens Nyheter (DN) newspaper.

Following the incident, Emtestam was eventually released when an ordinary police officer intervened.

A spokeswoman for Bildt said Emtestam was “kept at the site against his will for a little while and roughly handled” but was not taken away.

The violence meted out to Emtestam and other protestors, prompted a strong condemnation from Bildt, who has called the Belarussian ambassador in Stockholm into the foreign ministry for an explanation.

“We condemn the violence towards, and arrests of, peaceful demonstrators carried out by the Belarusian regime,” Bildt said in a statement.

“Only yesterday evening, a Swedish diplomat in Minsk was also subjected to this violence. This is completely unacceptable and constitutes further confirmation of the country’s lack of respect for fundamental democratic rights, a shortcoming that Sweden and the EU have clearly criticised on a great number of occasions.”

Emtestam normally serves as the Swedish embassy’s second in command, but as Ambassador Stefan Eriksson is currently on leave, he is the embassy’s acting chargé d’affaires.

Emtestam was, according to Swedish media, observing the demonstration, in which around 3,000 people took part.

According to an AFP reporter in Minsk, at least 25 people, including many journalists, were arrested during the opposition demonstration that had been called for on social networks.