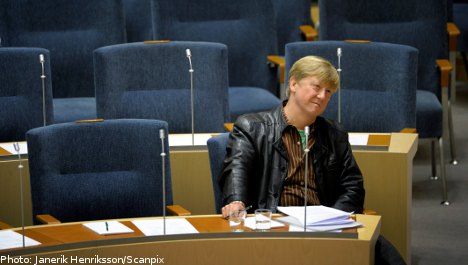 “I think the speaker had a word with him about it,” said Sven-Erik Österberg, former Social Democrat constitution committee spokesperson to the Aftonbladet daily.

Österberg said that dress code is a subject often debated at parliamentary group leader meetings. But in the case of Carlgren’s jacket, most were in agreement that it was a clear sartorial no-no.

Otherwise, many of the Riksdag’s fashion faux-pas are typically committed by female members.

“Things have got a bit more slack over the years. Many say that the slackness has gone further on the women’s side. I think that there should be a strict dress code,” Österberg told the Svenska Dagbladet (SvD) daily.

“I saw a female MP in the speaker’s chair dressed in baggy jeans and sneakers, a bit hip-hop style. I don’t think it is appropriate. That is no way to show respect for democracy,” said Björn Söder of the Sweden Democrats to SvD.

On the Riksdag’s web page the advice offered is that a well-groomed style is recommended.

“For men, this means a suit jacket or a cardigan resembling a jacket,” it says.

There are also jackets available for loan to those who have forgotten theirs. There is however, no advice offered for women. Österberg thinks that this is one of the problems.

“There is clear advice for men but no dress rules for women. We should make it a bit stricter, because it is quite difficult today for women to know what is meant by the advice given,” Österberg said.

The Green Party’s Mikaela Valtersson agrees that it is easier for men than women.

“Jackets must be worn in the chamber so for men it ought to be easy. So Carlgren’s jacket… I don’t know what to make out of that. But for women it is harder to issue any direct rules,” she said to Aftonbladet.

“I think it looks great,” he said to SvD.

Regarding the chamber’s dress code he said that he thinks that it is good that there are recommendations on how to dress but that he feels the jacket was in accordance with these.

However, he conceded that he wouldn’t wear his favourite item of clothing – a woollen hoodie – to the chamber on account of it not “resembling a jacket”.

Carlgren’s press office told The Local on Tuesday that despite the mixed reactions from colleagues, he still stands by this statement.