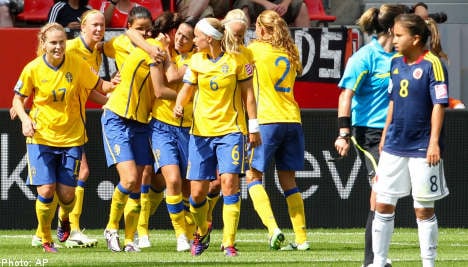 The 57th-minute goal came after a string of near misses from the bungling Swedish frontline but it was enough to secure all three points in their first meeting against the South Americans.

It was a worthy debut on the world stage for the young Colombians, who took to the pitch after the news that veteran goalkeeper Yineth Varon had been kicked out of the tournament for failing a doping test.

The 29-year-old tested positive following an out-of-competition test in Leverkusen last Saturday and is now suspended from all football pending an inquiry, but has the right to ask for her ‘B’ sample to be analysed.

However, the 31st-ranked Colombians proved on the pitch that they were more than a match for the fifth-ranked Swedes.

Striker Lotta Schelin missed an early chance to open the scoring when alone in front of goal, her weak effort cleared on the goal-line by Colombian skipper Natalia Gaitan.

Minutes later it was the turn of captain Caroline Seger to aim a timid kick at goal with Sepulveda, 23, proving up to the task.

The Swedes missed a golden opportunity again on 12 minutes when Schelin set up Landström, only for the Frankfurt-based striker to send her effort over the bar at close range.

The Colombians were hit when Gaitan was stretchered off briefly after being barged by Landström, with Seger then booked for a foul on Daniela Montoya. Yoreli Rincon, 17, sent the resulting Colombian free-kick wide.

Back after the break it was more of the same from Sweden as a run by Schelin past Sepulveda towards an empty goal saw the 27-year-old Lyon player fire wide.

A further dreadful effort from Landström after 57 minutes had Swedish coach Thomas Dennerby shaking his head in disbelief.

But seconds later the disappointment turned to joy as Landström picked up a Schelin cross and finally found the target.

Midfielder Carmen Rodallega missed chances to level after 66 minutes and in the dying minutes of the game, but it was the Swedes who missed most of their chances to pull ahead through their own efforts and the solid Sepulveda.

Sweden have reached the quarter-finals at four of the last five World Cups, missing out only at China 2007, when they were eliminated in the group phase.

The 1984 European champions next play North Korea on July 2 in Augsburg and the United States on July 6 in Wolfsburg.

The South Americans next clash is with world number ones the United States on July 2 in Sinsheim, with their final group game against North Korea in Bochum four days later.