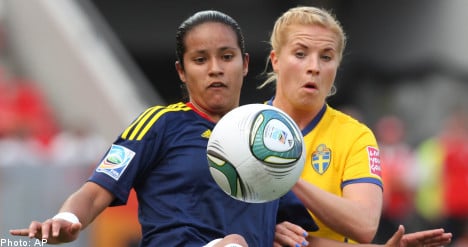 The towering Swedes used their physical power to get the upper hand on the young Colombians who were frequently floored during their World Cup debut following clashes with the Scandinavians.

“Of course we have to use our superior physique. That is what every country does, use your attributes,” said Dennerby.

Colombian skipper Natalia Gaitan, who caused the Swedes problems early in the game, was to find herself the brunt of one such tackle as the 20-year-old defender was floored by a barging Jessica Landström.

Defender Gaitan, at 1.64m one of the taller Colombians, was stretchered off temporarily after colliding with the 1.8-metre Landström.

“I was too fast on the ball and it was unfortunate that she injured herself,” said 26-year-old Landström, who scored the only goal after 57 minutes following a string of missed chances.

And 1.76m skipper Caroline Seger was later booked for a foul on 1.58m midfielder Daniela Montoya, with Dennerby finally deciding it was “wise” to substitute Seger after a near miss in the second half.

“We knew that they were strong, taller, bigger than us,” said Montoya.

“So it was a very uncomfortable match because of all that, but until the end we had chances to equalise. We’re now going to think about the next two matches, it’s not the time for regrets.”

Dennerby said that expectations had been high for Sweden who failed to get past the group stages for the first time in 2007.

“An opening match in a World Cup against Colombia expectations are high for a team to bag points. It wasn’t looking so promising when we weren’t able to score but we resolved that situation in the end,” he said.

“It was an excellent opening match both physically and mentally for us.”

And he said that they would be using the same tactics against North Korea on July 2, with a game against the United States four days later.

“Let’s get our strength out, that’s what counts,” he added.

Colombia coach Ricardo Rozo admitted it had been a bruising debut.

“The match was tough,” said Rozo.

“Sweden is a big team and went after us from the beginning. We cannot be so strong physically so we have to go via the technical skills.”