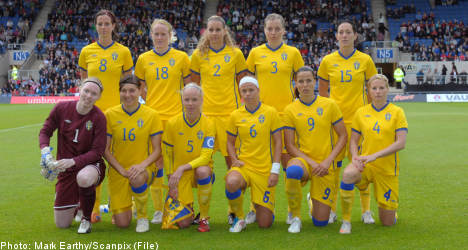 The Scandinavians dominated young and inexperienced Colombia in their women’s World Cup Group C opener to claim their three points and a victory over yet another young side in North Korea could push the Swedes into the final eight before having to face off with title contenders United States in the group finale.

The 2003 runners-up Sweden and North Korea are no strangers at the World Cup as they have squared off in the group stages of the past two tournaments – Sweden winning both games, 1-0 in 2003 and 2-1 in 2007.

The Swedish boss said he expects the North Koreans to use their usual fine passing game and hope to create chances – of which they had their share against the United States in their 2-0 defeat.

“They will continue with their physical passing game. We want to do the same as (against Colombia), using our strength and not falling into the trap of short passes,” he added.

North Korea urgently need at least a point against Sweden if they hope to advance to the quarters for the second consecutive tournament – after finishing ahead of Sweden at the group stage at China 2007.

Head coach Kim Kwang Min said a number of his players were still dealing with the lingering effects of being hit by lightning three weeks ago back in North Korea and he hopes his players could be in a better state of better fitness against Sweden.

Kim believes his team can be confident following their solid showing against the Americans – especially in the first half and after the Americans pulled ahead 2-0, when they had a number of solid chances to score.

“We showed to everyone that we can fight with the world number one (United States) and now we will have more confidence against our next opponents,” said

Key will be North Korea’s endurance and strength in the second half – which limited their ability to implement the game plan against the United States.

The Swedes will have to find an answer for the right side of the North Korean attack, as Kim Su Gyong and Song Jong Sun caused the American defence problems for most of the game.