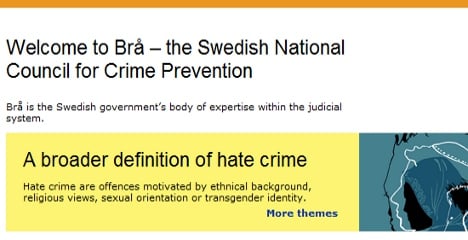 “We have been saying for several years that here has been a decrease. It is a bit sensitive because public opinion is of the impression that hate crimes are on the up,” said police officer Mikael Ekman, one of the founders of the hate crimes unit at Stockholm police to news agency TT.

“The increase in islamophobic hate crimes could partly be explained by a series incidents in Skåne County that generated a large amount of reports,” said Klara Klingspor of the council in a statement

Although Ekman fears that there are probably large numbers of unreported cases that don’t make the statistics, he says that police see a noticeable decline in hate crimes.

“Hopefully this means that something is getting better in society. Hate crimes work like a thermometer, an increase indicates societal disquiet in general. You get more intolerant if you feel badly treated yourself,” Ekman told TT.

Few reports lead to prosecution and Mikael Ekman thinks that the Swedish judicial system lacks knowledge of that type of crime.

“Police have got much better at this but the prosecutors and courts haven’t kept up with the development,” he said to TT.

According to Ekman it is ignorance that is behind it. Hate crimes are more complicated and require more work and deeper investigations.

“More questions need asking by both the police, the prosecutors and by the courts. And they need to be the right questions,“ he said.