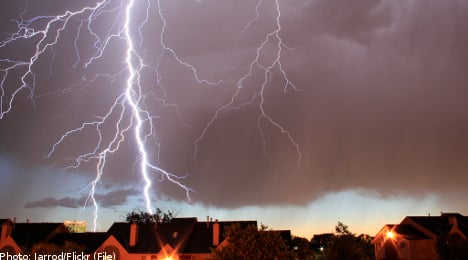 The Swedish meteorological institute (SMHI) warns that troubles may not be over yet.

“A thunder cloud has formed over Skåne. When the weather is this warm and humid, this can cause very powerful thunderstorms, with downpour and gusts,” said Eva Strandberg, meteorologist at SMHI, to news agency TT.

The violent storm blew in over Östergötland and Småland, south-eastern areas of Sweden, on Saturday. At worst, 2500 households in the Norrköping area were left without power.

SMHI has issued a class 1 warning, which means there could be certain risks to the general public, and the deluge caused chaos in the areas worst hit by the storm.

“Many urban areas are flooded with water, and roads and railroads are underwater,” said Leif Stenberg, head of rescue operations in Linköping.

The region was also hit by numerous fires caused by lightning, including one private home. Several stores were forced to close after losing power.

“We’ve been getting calls non-stop. We’ve had people stuck in elevators that we’ve had to help out,” said Michael Strömberg, in charge of Norrköping’s emergency services.

SMHI reports that the risk for thunder continues on Sunday in several areas of southern Sweden: Öland, Gotland, Skåne, Blekinge and Småland.

The unsettled weather is also expected to continue into the coming week, according to meteorologists’ forecasts.