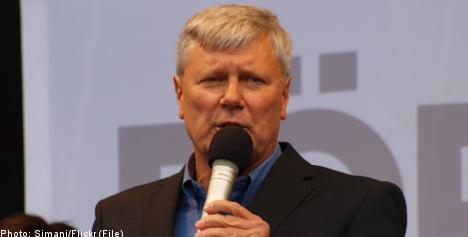 Over half of the party’s district leaders, 14 people, would like a new party leader in time for the election, reports the newspaper Dagens Nyheter, after making calls to all the districts.

As recently as November 2010, Ohly was still popular with all but one of the district leaders.

“Although Lars Ohly is doing a good job, he’s not managing to bring out the message of the Left Party’s politics, which is proven by our election results,” said Egon Frid, disctrict leader in Skaraborg and former MP, to Dagens Nyheter.

In the election last fall, support for the Left Party dropped to 5.6 percent.

“With Lars Ohly, power has gathered around one person, and the anchoring in the party has been affected,” concluded Frid.

Many of the district leaders suggested Jonas Sjöstedt, MP, as a possible alternative to Ohly. Sjöstedt has confirmed that he is interested in shouldering this responsibility.

“I will run, if I have support from our local districts,” he said.

He has some stiff competition however, from economic-political spokeswoman Ulla Andersson, the party’s group leader in the Riksdag, Hans Linde, and employment spokeswoman Josefine Brink.

Lars Ohly dismisses the criticism within the party. At the same time, he understands those who want him to resign.

When asked how long he will remain party leader, Ohly responded:

Ohly has been the Left Party’s leader since 2004, taking over the role from predecessor Ulla Hoffman.

Over half of the Left Party district heads are also positive to the idea of a dual leadership, similar to the Green Party’s two spokespeople.

“That would get rid of the person cult formed around a leader, as well as create some sort of equality. That’s two plusses I can see,” said Blekinge’s district leader Peter Bowin to Dagens Nyheter.

Ohly is sceptical to a dual leadership but would go along with it if that was what the congress reommended, according to TT.

Jonas Sjöstedt thinks that changing to a dual leadership would be wise.

“I think it would give a much better idea of what kind of party we are. That we, as a feminist party, should have at least one woman on the party leader spot,” he said.

When asked what advantages he has compared to Ohly, Sjöstedt responded:

“I suppose I shouldn’t promise too much in advance, but I have been pretty good at winning elections.”