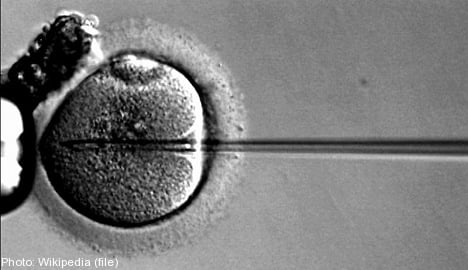 The technique will help doctors determine the chances of giving birth to a healthy baby through IVF, they said.

At present, fertility clinics tend to transfer several embryos to the uterus to boost the chance of a live birth, but this often leads to multiple pregnancies that carry a higher risk of complications for the mother as well as a lower birth weight and developmental difficulties for the child.

“There are other prediction models, but this is the first one that differentiates between the chance (of pregnancy) if you transfer either one or two embryos and also calculates the risk of twins,” Jan Holte of the Carl von Linne clinic in Uppsala told AFP.

With this model, “when it is time for transferring embryos, if we see that the twin risk is too high, we only transfer one embryo and we freeze the others,” he explained.

Over four years (2004-2007), his clinic transferred 3,410 embryos. The model helped slash the rate of twins in IVF pregnancies from about 26 percent in a preceding four-year period, to 1.9 percent.

At the same time, the rate of live births per fresh embryo IVF transfer fell slightly from 29.1 to 24.6 percent, while for an embryo that had been frozen, stored and thawed, it stayed almost the same at 31.1 percent.

The model factors in the woman’s age, the number of eggs and the ovarian responsiveness, information about whether the woman had had previous IVF attempts and the quality of the embryos.

In some cases, “the extra embryo which is usually transferred in a lot of clinics all over the world increases the twin risk enormously but (increases) the chance of pregnancy only by very little,” Holte explained.

For example, in a case where a young woman who responds well to the fertility treatment, transferring two of the “top” embryos could lead to a 65 percent pregnancy chance. But there would be a one-in-two chance of twins.

“If instead we transfer only one (the ‘top’ embryo), the chance for pregnancy will still be more than 50 percent,” said Holte. “We reduce the overall pregnancy chance very little, but we reduce the twin risk to essentially zero.

In such cases, the doctors would therefore transfer only one embryo and freeze the other one.

“If the first one does not give a result, we then transfer the other embryo,” he said. “In such a patient, it will give about a 40 percent chance of pregnancy, so we don’t waste the chance.”

To develop the model, Holte and his team analysed data from 3,223 embryo transfers performed between 1999 and 2002 and initially looked into 80 factors before narrowing it to four.

It is now used in four clinics other than Holte’s own, three in Sweden and one in Italy.

“I think it will probably be a good option for other clinics to try it, because in the long run … you can solve the problem of really dangerous multiple pregnancies and … end up with the same total number of births,” Holte said.

The model is easy to use because all clinics have the basic data and can score embryos using the same method fairly easily, he said, adding there was even a possibility to test the model with the help of web-based software.

The work was presented Monday at the annual conference of the European Society of Human Reproduction and Embryology (ESHRE) in Stockholm.