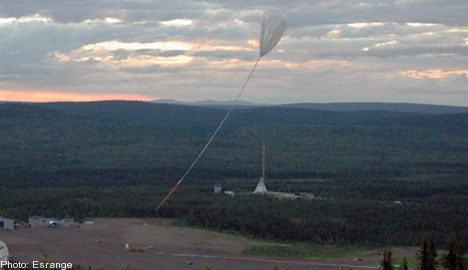 “We sent it up without any problems, but then we were forced to take it down. It was leaking, and when a balloon leaks it loses height,” said Johanna Bergström-Roos of the Esrange Space Centre, near Kiruna in northern Sweden.

“These things happen,” she told AFP.

The PoGOLite (Polarised Gamma-ray Observer), a two-tonne telescope dangling from an enormous balloon filled with one million cubic metres of helium was launched in the early hours of Thursday morning from Esrange and was brought back to earth shortly after 7:00 am.

Space centre officials could not say exactly how far the balloon had gone, only saying it “did not go very far” and never made it past the mountain range

on the Swedish-Norwegian border.

It had reached an altiutude of about 35 kilometres (22 miles), just short of its 38-kilometre altitude goal.

The PoGoLite’s aim was to study the x-rays emitted by neutron stars,

It was meant to drift on westward winds to Norway and onto Iceland, Greenland and Canada, scientists said on the project’s website.

They even hoped for the balloon to make it all the way around the North Pole by continuing “the flight over Alaska and onwards over Russia, returning to Sweden some 20 days” after the launch.

“We reached 35 kilometres. We are hugely disappointed, and are hoping that the gondola is intact,” the scientists said on PoGoLite’s website.

before another launch attempt could be made, adding it was unclear how much

time that could take.