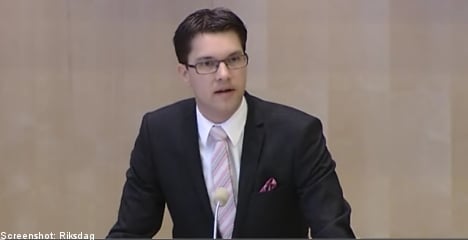 Only 4.2 of the electorate described the party as their favourite last month, down by 2.4 percent from the previous month, reports TT.

The voter survey, carried out by Skop, was based on telephone interviews with 1059 people made during the period between June 17th and July 3rd. They were asked the question: “Which is your favourite political party?”

The result was good news for the centre-right Alliance which saw a 2.3 percent rise in popularity, closing the gap on the Red-Green opposition, polling their second best result since the election in 2010. Support for the two largest parties, the Moderates and the Social Democrats, remains at a pretty steady 30 percent meanwhile.

The Liberal (Folkpartiet) and Centre parties have both seen a rise in popularity recently, with the Centre party especially on a roll, having increased in each of the past three months.

The Green Party has also seen a slight increase, but the latest opinion poll has not been so positive for the Christian Democrats. Only 3.1 percent of those surveyed described them as their favourite party.

It remains to be seen how the recent campaigning in Almedalen will effect the electorate, although the Social Democrats leader Håkan Juholt will be hoping for a boost after his speech on Friday during which he presented a sweeping row of new points on labour and employment reforms.The Sweden Democrats Party has lost one in three voters over the past month according to the latest opinion survey.