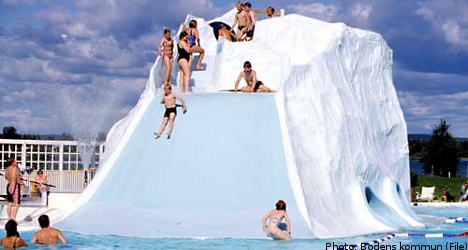 Bathers at an outdoor swimming pool were enjoying the brilliant sunshine on Sunday when events took a turn for the worse for one young girl enjoying the slide at Boden’s Camping in the far north of Sweden.

The three year-old girl was left nursing a painful injury after she lost her finger in her descent.

According to police reports, the girl was halfway down the slide, known as the “Ice Berg”, together with one of her parents when her finger got caught on something, and was partially torn off.

The girl was immediately shipped off in an ambulance, but the matter of finding the remains of the finger proved trickier.

“We closed off the entire pool to look for the part of the finger that fell off,” Peter Wallin, manager of Boden’s Camping, told regional newspaper Norrbottens-Kuriren on Sunday.

The police are currently satisfied that the incident was an accident and have no suspects in the case.

“We have a formal investigation, but there’s no suspicion of a crime. If the materials were faulty, no one can be charged for it,” said duty officer Anders Calderäng to the newspaper.

The popular slide has been closed down, until the investigation is completed.

“This is the most severe accident that has occurred by the ‘Ice Berg’ since its inauguration, and we’ve had nearly a million rides per year,” said Peter Wallin.

The missing finger has since been found and taken to the hospital. However, no information has been released on the girl’s condition, or whether the finger has been successfully re-attached.