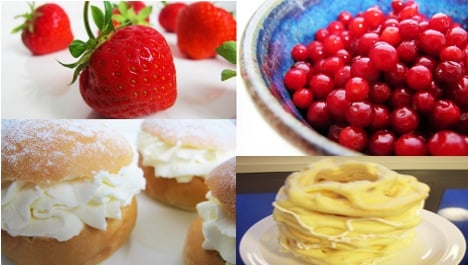 As an expat in Sweden you find yourself occasionally longing for the foods that remind you of home. Whether it’s vegemite, clotted cream, or BBQ ribs there are foods you plan to get your fill of on your next trip back.

On the flip side, you inevitably find favorites in a new country. I gave it some thought and compiled my top ten list of foods I would miss if I left Sweden. Some things are seasonal, some regional, and some are plain old supermarket staples.

Asking me to choose my absolute favorite from the list would be like asking me which one of my kids I love the most, so here they are in no particular order.

IN PICTURES: 10 Swedish foods to remember

Räkor (Swedish shrimp) had me hooked from my first visit to Sweden in 1998. I raved about the divine little crustaceans so much that every successive trip my husband’s family made sure my first and last meal in Sweden included plenty of "räkor".

What makes the little delicacy extra tasty is the variety of shrimp, pandalus borealis, and the fact that they are cooked in their shells directly on the boats. The frozen peeled versions hold no comparison.

Princesstårta (Princess cake) is another food I fell in love with on my first trip to Sweden. The thin layer of vibrantly green marzipan crowned with a pink rose conceals the dome of fluffy cream resting on a minimal layer of fruit filling, custard, and sponge cake. There is the frozen version at IKEA, but nothing beats princess tårta from a good bakery. Not even home made.

Nyponsoppa (wild rose hip soup). The somewhat syrupy, slightly grainy consistency can be a little off-putting at first but the earthy, sweet flavor of wild rose hips is unique.

Served warm or cold, what makes it for me is the über-crunchy little coconutty nibs of mandel biscuits floating on the top with a generous dollop of whipped cream.

Kanebullar (cinnamon buns). There is an omnipresence of "kanelbullar" in Sweden. You can even find them ‘fresh baked’ at petrol stations. But unless you are having a "kanelbulle" craving emergency it’s worth seeking out a proper bakery.

Even though the ingredients are pretty standard, the end result can vary significantly. I love it when the creases of the spiral open up a little bit during baking to reveal the sticky filling of cinnamon blended with butter and sugar. The sprinkling of snow white pearl sugar on the top adds just the right amount of crunch.

Varmrökt lax (smoked salmon) is salmon candy in my opinion. Slow-smoked over alderwood, the skin turns a glorious golden color with moist and perfectly pink meat below. It’s such an easy meal served cold with a little romsås (crème fraiche-based caviar sauce) and boiled potatoes or flaked into some spinach pasta with cream sauce.

Filmjölk (processed soured milk) seems to make an appearance in every household and kids gobble it up at school snack times. Even though it’s a cow milk-based product with a consistency like cultured buttermilk, kefir and yogurt, the taste is unique because it’s fermented by a different bacteria. I prefer mine with a drizzle of home made elderberry syrup and muesli.

Jordgubbar (Swedish strawberries) are a seasonal favorite and I love the excitement and hype that comes with their arrival.

The berries are a justified source of pride among Swedes and the summer wouldn't be the same without them. The abundance of light and the cool nights in the Swedish summer make for sweet berries that have people lining up at stands to purchase the ruby gems.

The annual harvest is around 15 million kilogrammes, equating to 3-4 liters per person in Sweden. I undoubtedly polished off my 4 liters well before Midsummer.

Speaking of rubies and berries, lingonberries have to be on any self-respecting list.

There are myriads of lingonberry flavored foods in Sweden, from sparkling water to chocolate, but the real treat is the fresh lingonberries you can find in supermarkets in the early fall. Or better still, pick them yourself in a misty Swedish forest.

My personal favourite iteration is raggmunk – the grated, fried potato cakes mounded with crispy fried bacon and a scattering of lingonberries.

Another seasonal favorite is semlor buns (fastlagsbullar in Skåne).

Although the creamy buns are associated with Easter I for one like the fact they begin to appear shortly after Christmas. This is frowned upon by some Swedes, similar to the disdain people feel when Christmas decorations go up in September, but you will hear no complaints from me.

My friend describes post-"semlor" consumption as "pleasantly nauseous" which is pretty spot-on. Piled high with cream atop almond paste, they don’t seem to come any smaller than softball size. Some people serve them in a bowl and pour warm milk over the top but disintegrating "semlor" holds no magic for me so I stick to eating mine straight up.

Finally there is spettekaka ("Cake baked on a spit"), my regional favourite in Skåne in southern Sweden.

The literal translation of "spit cake" certainly doesn’t do it justice. They are artworks in their own right taking hours to make as ribbons of meringue-like batter bake as they are piped onto a rotating spit. I love the delicate outcroppings that precariously support thin strands of hardened frosting.

You can always buy bits in a bag if you are just looking for a "spettekaka" fix without the expense of the flashy tower, but the fun of the tower is sawing out swaths with a special little tool. The taller the cake, the more dramatic it becomes as you try to figure out the next best way to procure a piece without sending the remainder of the confection crashing to pieces.

"Spettekaka" is so unique it has been recognized by the EU as a specialty food with Protected Designation of Origin (PDO) status meaning it’s only a true spettekaka if it comes from Skåne.

It was an enjoyable experience coming up with my top ten, so give it some thought…if you had to pick your top ten favorite Swedish foods, what would they be?

Check out The Local's 'Swedish foods to remember' gallery here.

Maia Brindley Nilsson is a designer and food enthusiast based in Malmö, Sweden. Her food blog semiswede is "sort of about Sweden, and sort of not."