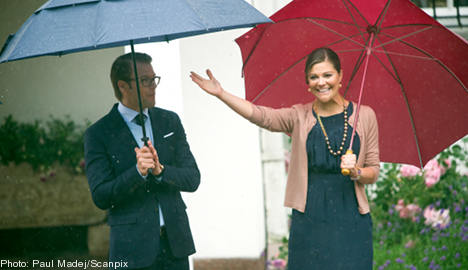 “The weather is terrible, but it is fantastic that so many are still here, it is heart-warming and touching,” said Victoria.

The Crown Princess was dressed in a navy coloured dress with a pink cardigan while Prince Daniel wore a dark suit. Victoria did the rounds, chatting to her visitors, accepted flowers and shook hands with people.

“I am here to give Victoria a necklace. I think that she and Daniel are so nice,” said 6-year-old Alva to news agency TT’s reporter.

The rain was only expected to increase in force during the afternoon. Victoria’s traditional birthday celebrations started at 1700 hours with the Royal family arriving around 1830.

This year the gathered crowd are treated to entertainment by a string of major Swedish artists such as Carola, Jessica Andersson and Andreas Johnsson.

Ice hockey twins Henrik and Daniel Sedin are also there, to receive the Victoria scholarship from the Princess’ hand after their monumentally successful season in Vancouver.

Since her second birthday in 1979 the popular princess has been feted in style outside Solliden Palace every year.

Last year the crowds had to content themselves with being greeted by her Royal siblings and parents, as Victoria spent her birthday honeymooning in the south Pacific.

Many travel far to catch a glimpse of the Royal family. Gerd and Brigitte Hussack from Munich were excited and happy to be there despite the incessant rain.

“The Crown Princess seems to be a very nice lady,” said Brigitte.

“Wonderful,” agreed Gerd, “ you do know her mother is German?”

Laila Tegnér from Sturefors outside of Linköping celebrates doubly on July 14th every year.

“I have come here the last 6 years, it is my birthday too so we celebrate each other. I generally get a hug, and I hope I will today too,” said Tegnér, who brought a homemade birdbath as a gift to the princess.

“Either she can use it at home in the Haga palace, or she can give it away to someone else,” she said to TT.