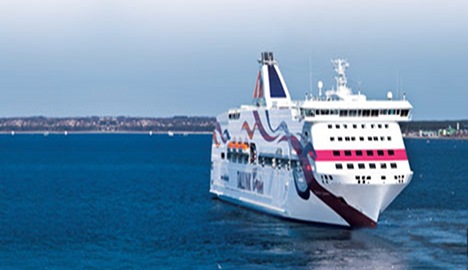 “Some people still think of the Baltics as Soviet-style leftovers, but that could not be further from the truth anymore,” points out Tallink Silja’s head of communications Janis Pavuls.

“Instead you have cities still growing fast but hanging on to what made them special before too. Tallinn has a kind of shabby-chic about it, but at the same time, it has enjoys an economy with tremendous dynamic economy, and it shows on the streets.”

Pavuls notes that although Tallinn and Estonia as a whole may not be the unearthed gems they once were, there are plenty of good reasons to take a short break to somewhere which, although not perhaps exotic, is still far from your average run-of-the-mill European capital.

“Tallinn is a wonderful combination of the old and the new. I would say that 99.9 percent of the people who come with us for the first time say ‘how come we never did this before?’” says Pavuls.

If you are one of those people for whom the holiday is as much about the journey as it is about the destination, a short break to Tallinn on Tallink could be a great double whammy.

Pavuls admits that the old accusation that the ferries were outdated and uncomfortable may once have had some truth in it, but again, that is no longer the case.

Having introduced seven new ships since 2002, Tallink and Silja Lines boasts the Baltic’s most modern fleet.

Onboard all vessels there are plenty of wining and dining opportunities, not to mention spa and wellness centres, pools, good restaurants, high class entertainment and some of the best duty free shopping in Europe.

Whether you are looking for a budget break, or a seriously pampered cruise, the choice is there. And at the top end, sumptuous luxury cabins offer unbeatable views as the ferry meanders through Stockholm’s beautiful archipelago.

The seven-course signature dish in the gourmet restaurant comes with a qualified sommelier on hand to help guide you through the extensive wine list.

Or for something totally different, there is even a classic Russian restaurant serving traditional Russian cuisine and a taste of a distant past.

A 40-hour cruise to the capital of Estonia is a fun holiday in itself, with two nights on board and a whole day on land to check out a city that is still largely untainted by mass tourism.

There is added poignancy for anyone visiting Tallinn this summer. August 20th marks the 20 year anniversary of the country’s independence from Russia.

A country of 1.5 million inhabitants, Estonia is still fiercely protective and proud of their independence and there are plenty of landmarks and monuments remaining which attest to what has been at times, a traumatic past.

The old town is a must-see. Although mostly restored, the medieval city retains a strong atmosphere among the ubiquitous souvenir sellers, while the Alexander Nevski Cathedral, an 1894 Russian Orthodox church with its distinctive onion-shaped domes, is a wonderful example of the architecture so closely associated with the former Soviet Union.

If you’re after something more modern, the Kumu Art Museum justifies its great reputation, displaying some of the Baltic’s most well known artists.

For something a bit more unusual, you could take a guided tour through the former KGB offices, situated somewhat bizarrely on the 23rd floor of the Sokos Hotel Viru Hotel. Artefacts include the remainder of an old radio room evidently left abandoned in rather a hurry.

Once the sightseeing is done, it’s time to spend some money. It is still considerably cheaper to shop in Estonia than in Sweden.

It may not be the bargain basement that the Baltics gained a reputation for a decade or so ago, but there is plenty to buy in a modern city that thrives, while still managing to embrace its history.

One of the most popular activities is a spa. Again it will cost less than half the price it does in Stockholm for an hour or a whole day of treatment, while there are restaurants and bars to cater for every taste and budget.

In fact, you may well decide that just one day in Tallinn is not enough – and Tallink offers four hotels in the capital.

“Taking a spa break is really popular, certainly at our hotel in the city centre,” says Pavuls.

“To me”, he concludes, “from the minute you step onboard, it always feels like you are leaving the daily grind behind you.”