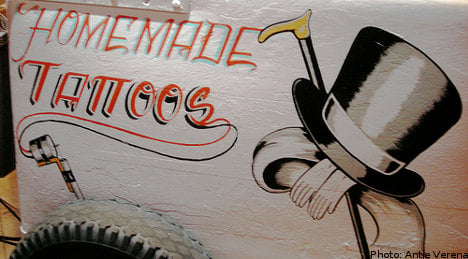 Both tattoo artists and sellers of tattooing equipment alike confirm a rise in the number of homemade tattoos in Sweden, according to news agency TT.

“You try it on your friends first and then you think you’ve got it,” said Fredrik Haux of the National Board of Health and Welfare (Socialstyrelsen).

In most cases the hand that wields the needle belongs to a happy amateur, according to Haux.

But professional tattoo artists are warning that the risks of infection increases greatly if the procedure is performed in a home environment.

One of the reasons behind the trend could be the unwillingness to pay expensive studio prices as well as the low cost of the equipment itself – a start up package sets customers back around a thousand kronor ($153).

But those who get a tattoo with unsterilized tools are putting themselves at risk for disease and infection, according to the National Board of Health and Welfare (Socialstyrelsen), which advises against homemade tattoos.

“Anything can spread via the blood, hepatitis and HIV for example,” said Haux, though added that there are no known cases of HIV spreading this way in Sweden.

But to keep the premises clean is difficult and unlike professional sites, environment and health authorities don’t conduct inspections of private homes.

“If you have disposable instruments that are kept completely sterile it might work to do this kind of thing from your own home,” said Haux.

Otherwise, he added, the would-be tattooists need to invest in sterilizing equipment, which will set them back several thousand kronor.

Normally tattoo artists would use a so-called autoclave, an instrument used to sterilize equipment by subjecting them to high-pressure saturated steam, to make sure all tattooing tools are clean.

But not all budding DIY artists want to invest in one of these and without one it is hard to keep equipment sterile.

But according to Alexander Pettersson Sundelin from Stockholm, a regular tattoo customer, the choice between a professional studio and a private tattoo artist isn’t so clear-cut.

“There are great artists who tattoo in their homes and take all possible hygiene precautions and then there are practitioners in studios that shouldn’t tattoo at all because they lack both the qualifications and equipment,” he told TT.