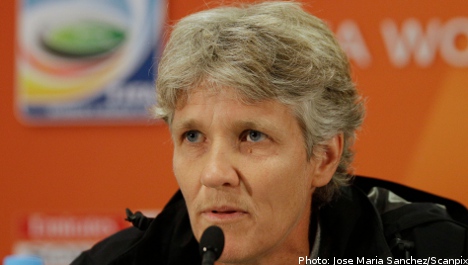 “We made just a couple of mistakes. We let them back in the game but I still think we did well,” Pia Sundhage said.

Japan twice came from behind to win the women’s World Cup for the first time on Sunday, beating the United States 3-1 on a penalty shoot-out after the final had finished 2-2 in extra-time.

“We had a lot of possession and played some good soccer. It’s hard to lose on penalties, some go in and some go out,” Sundhage said.

“It’s a small difference between winning and losing. We just didn’t take our chances,” she said.

The Japanese had defender Azusa Iwashimizu sent off in the 121st minute for a foul on US striker Alex Morgan.

“Our team was very focused and very organised, but it was our first final, so we didn’t really get into the game,” admitted Japan coach Norio Sasaki.

“At the end of the day, all’s well that ends well. We had lots of messages of support from our home country, thank you very much and thanks to the team.”

“We have some very good players on the team and that is why we won the final. It is all down to the players in front of me, it was a team effort,” said Kaihori.

“I got support during the shoot-outs because the Americans missed a couple. In a shoot-out, I just have to believe in myself and I was very self confident in that situation. I just wanted to save all those shots coming at me.”

The US had taken the lead in the second-half of normal time thanks to striker Alex Morgan’s sublime strike, but Japan’s Aya Miyama poached the equaliser after a mix-up in the American defence in the 81st minute.

This was Japan’s first win over the Americans at the 26th time of trying and was heartbreak for the Stars and Stripes as they missed out on a third World Cup title despite dominating Japan for large periods of the game.

German Chancellor Angela Merkel celebrated her 57th birthday by joining the 48,817 sell-out crowd in Frankfurt, while Dr Jill Biden, wife of US vice-president Joe Biden, and Chelsea Clinton, daughter of US Secretary of State Hillary, were also in the stands.

Japan made it to final after their shock 1-0 defeat of Germany in the quarter-finals before they dominated Sweden 3-1 in the last four.

The USA followed up a dramatic 5-3 win on penalties over Brazil in the last eight before they beat France 3-1 in the semi-finals.

The USA controlled the opening 20 minutes as left-wing Megan Rapinhoe and forward Lauren Cheney, who replaced striker Amy Rodriguez in the starting team, caused havoc, while Wambach hit the crossbar on 28 minutes.

The first-half finished goalless, but Cheney, with a heavily strapped ankle, was replaced at half-time by goal-scorer Morgan.

The USA kept up the pressure and Kaihori palmed Wambach’s header over the bar on 64 minutes.

The Americans’ pressure finally told when Rapinhoe’s long-range pass – which was half the length of the pitch – found Morgan who blasted her shot across Kaihori on 69 minutes.

Japan were gifted the equaliser on 81 minutes when defenders Rachel Buehler and Krieger scrambled to clear the ball in their own goalmouth, but left-wing Miyama reacted fastest and stabbed the ball home.

In extra-time, Wambach headed the US back into the lead in the 104th minute.

But Sawa equalised from a corner in the 117th minute with her fifth goal of the tournament to take the game to penalties.