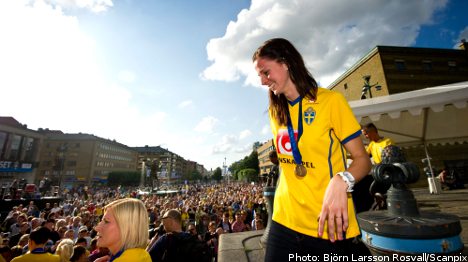 Over 5,000 people had gathered in the square to welcome the team, who beat France 2-1 on Saturday to claim third place for the second time. Sweden also finished runner up in 2003.

Sweden’s sports minister, Lena Adelsohn Liljeroth, was on hand to congratulate the players as they arrived in an open-top bus after a tour of central Gothenburg which began at Landvetter Airport.

“Enjoy the fact that you are the best in Europe! This is going to inspire many to start playing football,” she said.

Star striker Lotta Schelin was visibly moved when she was interviewed on stage.

“I have won the Champion’s League with Lyon. But this beats that,” she said.

After the celebrations, with music and a few renditions of the team’s signature dance routine, the players continued their lap of honour to the opening ceremony of the Gothia Cup youth tournament at Ullevi Stadium.

The evening’s festivities ended with a performance in the TV programme “Lotta på Liseberg” filmed at the Liseberg amusement park in the city.