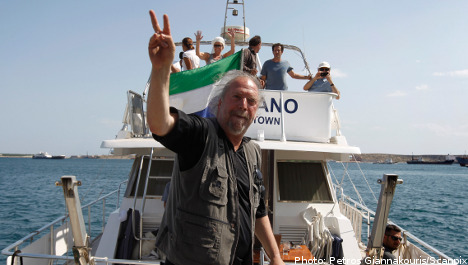 “The fifteen passengers were interviewed on Tuesday night and have willingly signed an agreement to leave within 72 hours,” said a spokesperson from Israeli immigration to news agency AFP.

On Tuesday just before noon Israeli soldiers boarded the French boat, the only vessel from the Freedom Flotilla protest convoy to sail towards Gaza.

Shortly before the boarding all communications to the vessel were cut off, according to Ship to Gaza.

According to a spokesperson for the Israeli army (IDF), the soldiers first tried to convince the activists to change direction and were met with refusals.

“Then the vessel was boarded, without violence from either side- it was completely peaceful,” said the IDF spokesperson to news agency TT.

Prior to the boarding several of the activists tweeted that there were four Israeli ships surrounding Dignité.

Following the take over of the vessel, the activists were taken to Ashdod, in southern Israel, where they were interrogated by the police before being handed over to immigration officials.

According to Ship to Gaza Sweden, all the activists have now been moved to a detention centre close to the airport awaiting deportation. They will be allowed to see their lawyer on Wednesday morning.

On Tuesday evening several demonstrations were carried out in Sweden’s major cities on behalf of the captured activists and the mission.

More than 300 activists from 22 countries had signed up to participate in this year’s flotilla, among them dozens of middle-aged and elderly Americans and Europeans.

Israel has made no secret of its determination to prevent the Freedom Flotilla II from reaching Gaza, which has been under a blockade since 2006 after militants there snatched an Israeli soldier who is still being held at a secret location.

The Swedish ship Juliano was forced to give up its attempt to sail to Gaza after it was refused permission to leave Crete.