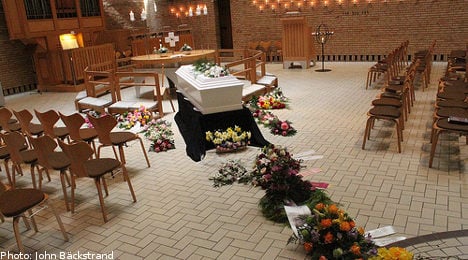 The metal residue obtained after dead people had been incinerated could be recycled, the church argues, pointing out that each year 22 tonnes of precious metals are instead buried in Sweden’s cemeteries.

Some 70,000 people are cremated in Sweden each year and the ashes are placed in urns for later burial.

But in addition to the ashes, knee and hip replacement joints or thigh bones made of expensive materials such as titanium often survive the 800 degree Celsius temperatures of the crematorium ovens.

Current legislation does not allow for the materials to be recycled, which is common in neighbouring Denmark and Finland.

“Current legislation means… that what can’t be accommodated in the urns should be buried in new graves. This involves a lot more work for us,” said Gothenburg funerals head Katarina Evenseth to SVT.

The church has joined forced with funeral agencies and the Swedish Federation of Cemeteries and Crematoria to pen a letter to the government on the matter, but they have received a lukewarm response.

A bill is set to be submitted this autumn proposing amendments to the funeral law.