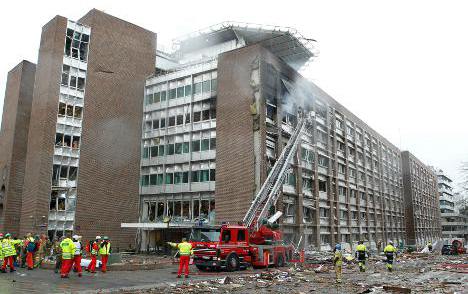 Writing on his Twitter page, Bildt said that he was closely following events after a massive blast rocked government buildings in central Oslo and a gunman went on the rampage on Utøya, an island to the north of the capital which was hosting a social democrat youth camp.

“I immediately had contact with my Norwegian colleague Jonas Störe to express our deep sympathy to all those affected and to provide any assistance such as may be required.”

In a later post, Bildt commented concluded that the blast was an attack.

“Terrorism has struck. Police confirms bomb in Oslo. We are all Norwegians,” he said.

By 9am on Saturday, seven people were confirmed dead in the bomb blast and there were reports that at least 84 people had died on Utøya. Many more are wounded and police fear that the death toll will continue to rise.

One man was later arrested on Utøya and it is thought that the same “tall blond” man was seen earlier in the day at the scene of the bomb attack.

Norwegian police later confirmed the man’s identity as 32-year-old Anders Behring Breivik, who is known from right-wing extremist circles for his critical views of multiculturalism and Islam.

According to the Norwegian VG daily Behring Breivik created a Twitter account six days ago, which he used to publish a quotation from the British philosopher John Stuart Mill.

As the full horrors of the tragedy emerged, Sweden’s prime minister, Fredrik Reinfeldt, issued a statement:

“I offer my deepest condolences for the tragedy that has happened in Oslo and at the Norwegian Social Democrats’ youth camp. My thoughts go to the relatives of the victims and to those who have been injured.”

Reinfeldt contacted his Norwegian counterpart, Jens Stoltenberg, offering Swedish assistance “in any way that it should be required”.

“We are following the ongoing developments. There is still much that is unclear about what has happened,” he added.