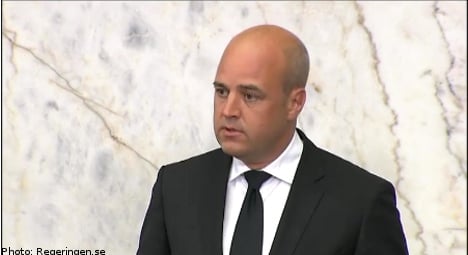 “The unthinkable has struck our neighbours in Norway,” stated a subdued Reinfeldt, adding that this is most likely the most violent attack Norway has experienced.

Seven people have now been confirmed killed following the bomb explosion in central Oslo, and at least 84 died on Utøya, an island hosting a social democrat youth camp, where a gunman went on the rampage. It is feared that the death toll will rise, as police continue their search of the island on Saturday.

A man has been arrested for the massacre at Utøya, and it is thought that he also lies behind the blast in Oslo.

Police have confirmed his identity as 32 year-old Anders Behring Breivik, a right-wing extremist known to have been critical of islam and multiculturalism.

“I offer my deepest condolences for the tragedy that has happened in Oslo and at the Norwegian Social Democrats’ youth camp. My thoughts go to the relatives of the victims and to those who have been injured.”

Foreign minister Carl Bildt has also expressed his empathy, and on Friday confirmed through his blog that he has been in contact with his Norwegian colleague Jonas Störe to offer any help needed.

At the press conference at Rosenbad, Reinfeldt continued, “A difficult trial awaits the whole Norwegian society, but questions will be raised by us in Sweden as well: fear and rage that a person can be capable of doing this to fellow man.”