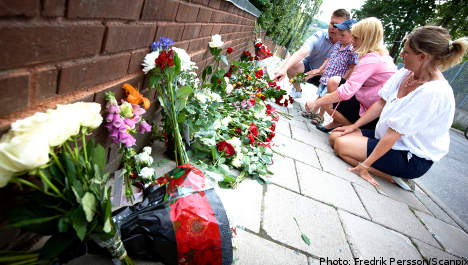 Youth football tournament Gothia Cup in Gothenburg was among those who wanted to show their respect, and the victims of yesterday’s terror attacks were honoured with a silent minute during Saturday’s final for 17 year-old boys.

Both the crowded stands and the teams on the field, Brommapojkarna and Gais, fell silent.

“It suddenly feels as though everything else is meaningless. What could really matter anymore?” writes Gothia Cup’s secretary general Dennis Andersson on the tournament’s website.

“Our thoughts are constantly with victims and their families.”

Social democratic leader Håkan Juholt has also released a statement condemning Friday’s bombing and shooting, in which 91 people have been confirmed dead thus far, with the death toll expected to rise further.

“I was shocked and appalled to hear the reports from Oslo and Utøya. Once again we have experienced the shock of a bombing that strikes innocent people. This is an attack upon our democratic and open society, an attack which causes disgust and must be condemned,” he said.

In Stockholm, a candle-lit vigil is planned to take place at 6 pm, outside the Norwegian embassy.