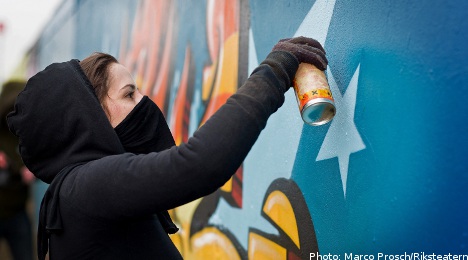 “This is censure, and a direct threat against our freedom of speech,” said the event’s producer Ceylan Holago to daily newspaper Dagens Nyheter (DN).

The city based their decision on their zero-tolerance policy against graffiti and vandalism from 2007, which states that Stockholm will not support activities or events that don’t clearly renounce tagging, illegal graffiti, or similar acts of vandalism.

Riksteatern was planning to publicise their event by allowing 13 graffiti artists to paint 300 different posters, which would then go up on Stockholm’s many cultural advertisement boards. These posters are now completed, but following the city council’s decision, they remain in storage, unused.

Holago is incensed that the city cannot see the difference between vandalism and art.

“Once again the vandalism policy is being used to stop an art form. They just don’t differentiate between scribbling vandalism and street art graffiti. This means that authorities and politicians can just arbitrarily stop us, and keep us from even informing about our event.”

The city council, however, stand by their decision, claiming it to be in line with the city’s zero-tolerance policy.

“There’s nothing strange about this,” said Claes Thunblad, manager of Stockholm city’s anti-vandalism department, to DN.

“Riksteatern can do whatever they want on their own property, we can’t control that, even if we in the city council are skeptical to this event. But when it comes to the city’s cultural boards, there are rules for what can go up. We just can’t have advertisement for a graffiti event that we so openly oppose,” he explained.

Thunblad goes on to point out that after the street art festival was held last time, in 2010, the police and the public transport system SL both experienced a notable increase of illegally painted graffiti.

This argument, however, doesn’t bite on Holago, who says he has yet to see statistics proving this is so, and also accuses the city of practicing collective punishment against artists who want to paint legally.

“You don’t shut off the entire highway just because there are people who abuse it and drive too fast. What we’re doing is offering a legal wall as an alternative to painting illegally,” Holago explained.

“We don’t believe in collective punishment, that just because there are vandals, graffiti shouldn’t be allowed in our society at all. There has to be an option for those artists who want to paint legally,” he said.

The festival “Art of the Streets” will be taking place at Södra Teatern in Stockholm on August 13-14th, where there will be workshops, seminars, and a legal graffiti wall to paint on.

“Riksteatern see graffiti and street art as natural expressions of art in a modern and open Sweden,” said Holago in a statement.