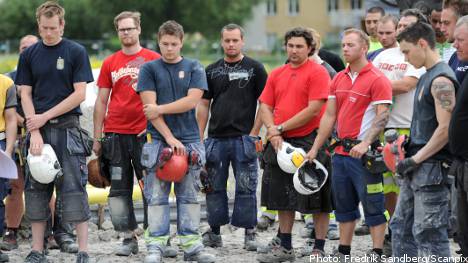 And many people across Sweden heeded the call. A number of work places ceased activity and Twitter fell silent as users kept their fingers still after a weekend of frenetic activity.

The minute began at midday and was started by Norway’s prime minister Jens Stoltenberg.

Stoltenberg has received warm praise for his response to the national tragedy which has so far claimed the live of 93 people. In an emotional speech at a memorial service on Sunday, Stoltenberg quoted one of the survivors.

“If one man can show so much hate, imagine how much love we can spread together,” he said.

Sweden’s foreign minister Carl Bildt emphasised the call for observance in a twitter post earlier on Monday, calling on everyone worldwide to stand up and reflect.

In a later blog post, Bildt called for a vigorous defence of the “open society”, citing Austrian philosopher Karl Popper and reflecting on comments he made on Sveriges Radio earlier in the summer.

“I said… that the big showdown in the future would go between us who believe in and want to see an open society and those who in one way or another way to close us in and everything else out there.”

“The bestiality we have experienced in recent days of deep tragedy will hopefully make us stronger in our conviction of the value of the open society.”