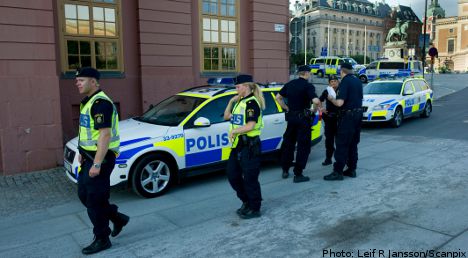 Buildings protected include Rosenbad, the government office and the Norwegian embassy, according to the security police Säpo.

According to Kvarnström, the Stockholm police force is responsible for monitoring buildings since Friday.

“If you’d asked me two months ago, what country this was going to happen in, I wouldn’t have said Norway,” he said.

European police organisation Europol warn in their terror report that extreme-right groups are very active on social networking sites on the Internet, where they reach out to young people. This can create a growing threat in future.

In total, 249 terror attacks were carried out, stopped or failed in EU 2010. However, none was connected with extreme-right groups.

And according to Norell, catching and preventing lone perpetrators such as Anders Behring Breivik is very difficult.

“It’s practically impossible to discover these people, if they aren’t active. Something has to happen for them to be discovered ahead of time,” he said.

In relation to inhabitants, extreme-right environments in Sweden are bigger than Norway, and the same size as in Denmark and Germany, according to Säpo.