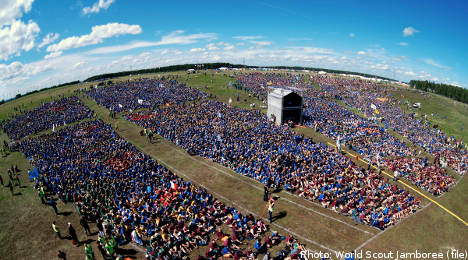 Maria Graner, Secretary general of the Swedish Guide and Scout Council (Scoutrådet), explained that the World Scout Jamboree is taking extra security precautions after the attacks in Norway.

“We’re in close contact with the police and the security police, working with them to assess threat levels against us,” she told The Local on Monday.

The event is taking place in a normally empty field outside Kristianstad, in southern Sweden, which has been transformed into a midsized Swedish town, equipped with everything from hospital to kitchen and plumbing.

Close to 40,000 scouts are expected to make the field their camp site for the duration of the twelve day long World Scout Jamboree.

The event doesn’t kick off until Wednesday, but roughly 7,000 eager participants are expected to arrive as early as Monday.

“A Jamboree means a lot to one’s internal pride. Scouts get a chance to talk to each other and exchange experiences,” Graner said.

Several hundred Norwegian scouts are expected to arrive to the camp, in the shadow of Friday’s tragic twin attacks on the country. One Norwegian already on the spot is 22 year-old Audun Ingebrigtsen, from Röyken, just west of Oslo. He was already in Sweden when the massacre occurred.

“But I have five good friends who were on Utöya. Luckily they all survived, but the feeling is surreal, I’m still in shock,” he explained to TT.

Going home was never an option; the support and sense of community the Jamboree offers is like therapy, he said.

Since Friday, he has also been flooded with text messages and phone calls from friends all over the world who want to show their support.

“I hope the Norwegian society doesn’t become less open after this. But a certain suspicion is unavoidable, perhaps,” said Audun Ingebrigtsen.