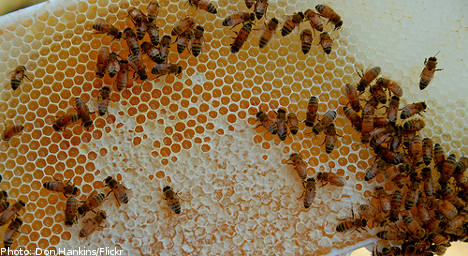 A number of bee broods outside Varberg in Halland County have been affected by American foulbrood (AFB), considered one the most common and damaging diseases affecting bees.

The disease has no known cure and can cause significant economic harm if not contained.

“Beekeepers are urged to go through their hives and look for signs of the spores so to ensure the brood isn’t infected,” the Halland County governing board said in a statement.

The disease affects new bee larvae up to three days old, which become infected by ingesting spores that are present in their food.

Spores germinate inside of and eventually kill the larvae, which can contain millions of new spores.

The only way to stop the disease from spreading is to burn hives in which it is discovered.

“It’s taken too many broods among a number of serious beekeepers and there is a risk that the disease will spread,” Gert Lagerstedt, a beekeeper and head of bee supervision for the county, told Sveriges Radio (SR).

If the disease is discovered, beekeepers are required to file a report with county agriculture officials and then destroy the brood, a policy which has kept the disease rare in Sweden, Eva Forsgren, a honey bee disease researcher at the Swedish Agricultural University (SLU), told SR.

However, as AFB has already spread to so many broods in Halland County, concerns are growing that the disease could spread further.