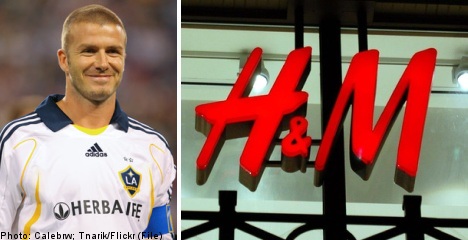 In what the company is calling “a significant relationship”, H&M is set to be the exclusive distributor of Beckham’s Bodywear line of men’s underwear.

The initial range will be launched in February 2012 to coincide with Valentine’s Day, with new Bodywear products to be launched seasonally thereafter.

“Over the past year, I’ve been developing my Bodywear range with my team and I’m extremely positive about what we have designed and produced,” Beckham said in a statement.

“The final piece in the jigsaw was a retail partner who has the vision and capability to distribute these products globally. In H&M we have found the perfect partner to collaborate with going forward.”

H&M’s head of design, Ann-Sofie Johansson, praised the former captain of the English national side as a “true icon both of sport and style”, calling the partnership as “incredibly exciting”.

“It is the start of an amazing adventure for us at H&M,” she said in a statement.

Earlier this year, Beckham and his business partner Simon Fuller, creator of the “Idol” song contest television programme, announced plans to launch a line of Beckham-branded products following the success of his collaboration with the Armani.

“This partnership with H&M is an important step in the evolution of David’s journey from sporting hero to entrepreneur and icon”, Fuller said in a statement, citing H&M’s global reach as an important vehicle for promoting Beckham’s brand around the world.