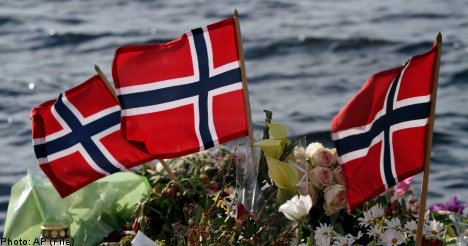 Norwegian flags and flowers are in Sundvollen, close to Utoya island

The 1500-page manifesto, entitled “2083 – A European Declaration of Independence” has been dubbed “a terrorist’s handbook” and was sent by 32-year-old Breivik to a number of far-right groups shortly before the bomb attack in Oslo and chilling massacre on Utøya which left more than 70 people dead last Friday.

A review of the documents by the Svenska Dagbladet (SvD) newspaper using Urkund, a program used to detect plagiarism in academia, revealed that much of the document could have been pieced together from Europe’s extreme right-wing blogs, including one of Sweden’s most vehemently anti-Muslim blogs.

Material in the manifesto had been previously published in January 2010 on the anti-Muslim blog, which has been described by the Expo Foundation as one of the largest in Sweden containing content that occasionally turns into pure violent rhetoric.

The portions taken from the Swedish blog are presented in the form of a research report that demonstrates how Muslims are taking over society as their population percentage rises.

The blogger, whose identity is unknown and who uses a pseudonym, admitted to SvD thagt he spread the information and is proud to have contributed to the manifesto.

“Unlike the cowardly, creeping Sweden Democrats, who are now trying to wash their two hands of it, I declare that I am certainly proud to be able to provide material against Islamisation,” he told the newspaper.

In a separate report, Nick Lowles, editor of the anti-fascist magazine ‘Searchlight’ who has studied right-wing activities for decades, claimed he had evidence that Breivik’s extremist views may have developed while he spent time in Sweden.

“It seems that much of his political development may have occurred while he was living in Sweden. Websites that he visited while in Sweden are much more extreme,” Lowles told Norwegian TV2,

The Swedish security service Säpo was reportedly surprised to learn that Breivik may have lived in Sweden.

“We did not know that. It sounds very interesting. We will look at it tomorrow (Friday). We will follow up on that information,” Säpo spokesperson Thomas Engberg, told the Expressen newspaper