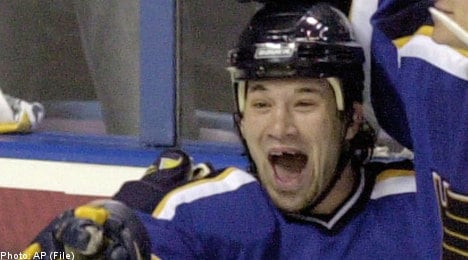 Danton, who confessed to hiring a hit man in April 2004 to take out his agent after his team’s quest for the Stanley Cup were snuffed, announced the news on the social media site on Thursday.

“I’ve just signed my first professional contract in 8 years. I’m going to Sweden for the season 2011-2012. Thanks to everyone for their support,” he wrote.

Danton, a former forward for the St. Louis Blues, pled guilty to murder-for-hire charges and was sentenced to 7.5 years in federal prison in November 2004.

His bizarre story drew more attention when the television network CBC aired a documentary on the volatile relationship between the two men.

The program described a homosexual love affair in parallel to several years of sexual abuse by Frost.

After serving five years and receiving parole in September 2009, the 175.5 centimetres and 86 kilogramme Danton continued both his studies and hockey career finishing two seasons with Canadian’s Saint Mary’s Huskies.

Current information contends that Danton’s next stop will be with the Swedish divisional club IFK Ore.

The team’s sport manager Jens Nielsen however refused to confirm the news.

“It’s something I deny in the current situation. Nothing is finalised,” he told Sweden’s national newspaper Aftonbladet.

Danton recorded three goals and two assists in 28 regular-season games during the 2010-11 season with the Huskies and added a pair of goals during five playoff games.