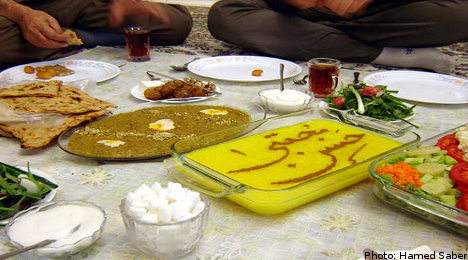 The Local reported last August about the particular problems facing Muslims resident in Sweden when Ramadan falls during the long days of summer.

With the fast beginning on Monday, 11 days earlier than last year in accordance with the lunar cycle, the lack of clear regulations stipulating the hours to be observed continues to cause problems for the devout.

During the fast Muslims are required to neither eat nor drink during daylight hours.

In Umeå in northern Sweden for example, dawn broke at 3.47am on Monday and the sun will set at 9.41pm, requiring an almost 18 hour fast, in comparison to 13 hours in Mecca.

According to Omar Mustafa, president of the Islamic League in Sweden, there is still no agreement on how Muslims in northern Europe should observe the fast.

“Several imams and organizations have different opinions. It is up to each individual to decide. But it is not meant that you should fast around the clock. Islam provides many options,” Omar Mustafa told the TT news agency.

Around 30 years ago Ramadan coincided with the Swedish pagan festival of Midsummer, when the sun is at its highest point across the continent. But thirty years ago there were fewer Muslims in Sweden and in Europe as a whole.

Ramadan follows the lunar calender and so by 2015 the fast will once again fall over Midsummer. This is an issue which is under discussion at the European Council for Fatwa and Research, which brings together European imams, Mustafa said.

“This issue has been discussed for a long time. This year we are to follow the sun, but the discussion is ongoing in Europe on how to jointly reach a solution,” he said.

The regulations governing Ramadan however allows for exemptions from fasting for those likely to experience health problems, such as children, the elderly and pregnant women.

According to the Islamic Center in Malmö, there are around 350,000 Muslims living in Sweden and despite the challenges many are gearing up for what is considered the highlight of the festive year.

“We usually find that we sell more fruit and vegetables, halal meat, dates and various dips, and we remind stores in advance, so they have the items in stock,” Louise Stephan, press officer at Coop, told TT.

Ramadan will continue for 30 days in 2011, ending with feast of Eid al-fitr on August 30th.