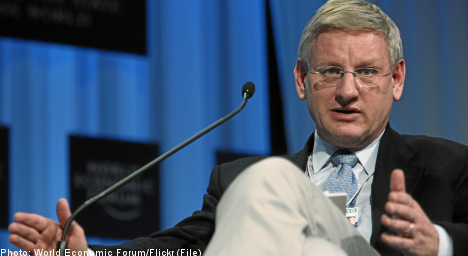 “We have every reason to condemn in the strongest terms possible this massive violence,” which further undermines the legitimacy of the regime, Bildt said in a statement.

“Furthermore, it’s totally unacceptable that this escalation has taken place at the beginning of the fasting month of Ramadan.”

“The fact that the demonstrations have amplified over the last few months shows that repression will never be a substitute for reform.”

“A peaceful transition towards democracy must begin immediately.”

The minister said European Union calls for a clear stance from the United Nations on the bloodshed had Sweden’s full support.

“The UN Security Council must break its silence and clearly condemn the massive use of violence from the regime’s side,” Bildt said in a blog post.

After this weekend saw the deadliest daily toll in near five months of anti-regime rallies, EU foreign policy chief Catherine Ashton said an emergency session of the UN Security Council would be held later Monday “to address the serious escalation”.