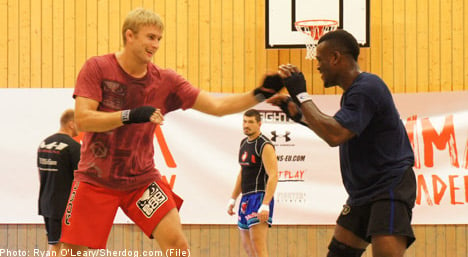 Despite his humble roots in central Sweden, Gustafsson, who measures a towering 196 cm (6’5”) and weighs a 93 kilos (205 lbs.), is an imposing figure whether he’s pummelling an opponent or simply conducting an interview.

And he’s been doing a lot of both of those activities in recent months during his nothing less than meteoric rise through the ranks of the world’s MMA circuits to reach the sport’s most prestigious league, the US-based Ultimate Fighting Championship (UFC).

This weekend, Gustafsson is set to do battle in Philadelphia in the eastern United States in UFC 133, a fight that could propel him toward a shot at a world title.

While most top MMA competitors are wrestlers from America, credentialed with college national championships and Olympic medals, or elite jiu-jitsu fighters from Brazil, Gustafsson bucks the trend.

Growing up in Arboga, a small town two hours west of Stockholm, the energetic and competitive Gustafsson began his fighting career as a boxer.

“Fighting was in my nature,” he tells Studio MMA in a recent interview, adding that he never took the activity very seriously.

But a 2006 trip to Gothenburg on Sweden’s west coast changed everything.

It was then that the athletic 19-year-old first discovered MMA and quickly realised that the fast-moving combat sport, in which sometimes bloody bouts can end in less than a minute due to a knockout or submission, was “his thing”.

The sport, which in addition to boxing added the disciplines of kickboxing, wrestling, Brazilian Jiu-Jitsu, and Muay Thai was exactly what the Gustafsson was looking for.

“He was a natural talent and he was big,” Gustafsson’s MMA coach August Wallen tells The Local in recalling his first impressions of the teen.

Soon thereafter, Gustafsson decide to make a career of the sport and found near immediate success, travelling to Finland in late 2007 to claim his first two professional victories.

By 2008, the Swede was also able to showcase his skills on his home turf in Sweden’s first MMA event since the passage of the country’s “martial arts law”, which voided a ban on professional boxing and other combat sports.

The Swede remains one of the sports best kept secrets, having competed in a number of lower-profile events outside the US, where the success of the UFC has helped boost the sports popularity.

Gustafsson is already the 15th ranked fighter in the world, with only one loss in 12 professional bouts in what is being hyped as “the fastest growing sport in the world”.

It was back in 2009 that Gustafsson, who had by then racked up eight straight wins and was defeating opponents within minutes, earned his nickname “The Mauler”.

“It was natural to give him something related to striking; if Alex doesn’t knock people out directly he just mauls them down over a round,” coach Wallen explains.

A short time later the Swede’s big break came in the form of contract from the UFC, the world’s elite MMA league, in what Gustafsson refers to as the “happiest day of my life”.

Suddently, Gustafsson found himself as the only Swede in the UFC, after two Swedes who had previously fought in the league were released with losing records.

“They wanted a Scandinavian fighter and they liked my style,” he says.

Since joining the UFC’s light-heavyweight division, Gustafsson has tallied three wins and one loss, making him a “hot prospect” in the eyes of many.

Gustafsson’s upcoming opponent in UFC 133 is Matt Hamill, a popular figure who has starred on a popular MMA reality show and is the subject of a feature film.

But going up against such a storied fighter in front of 15,000 rabid US fans at Philadelphia’s Wells Fargo Center – not to mention millions of television viewers – doesn’t phase the big Swede even if his country’s MMA reputation is now riding on his shoulders.