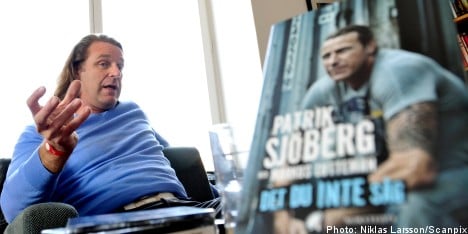 The controversial athlete caused a media storm with revelations in his autobiography earlier this year admitting that he had been sexually abused by his former coach Viljo Nousiainen.

Since the publication of the book he has regularly appeared in the media and was even invited to Parliament to discuss how to prevent more children and youngsters falling into a similar trap that he found himself in.

However the latest revelations, made in a radio interview on “Sommar i P1” to be broadcast on Saturday, will once again focus on his darker side.

In the show, Sjöberg, who was charged with possession of cocaine during the European Athletics Championships in Gothenburg in 2006, claims that when he was in Marbella during the 1990’s it was not unusual to be surrounded by drugs.

“The drugs in Marbella was a part of everyday life at the time,” he says.

Although he admits that if he were tested it could have been possible to find traces of cocaine in his system, Sjöberg strongly denies that he ever took drugs to enhance his ability in the field .

“Cocaine fools the brain into thinking that you are much better than you are. This is absolutely no advantage in the high jump – which is already full of egoists as it is,” He told Dagens Nyheter newspaper.

The athlete claims that his well documented drinking and party lifestyle came about more because of his long running injuries.

“I had so many problems with the Achilles tendon and feet – already that stopped me. That’s what the problem was that I partied too much because I had the problem.”

During the Autumn Sjöberg will tour the country holding lectures for BRIS (Children’s Rights in Society) a non-profit organization.